LONDON (REUTERS) - Campaigners handed Britain's government a letter on Monday (July 1) demanding more rights for the residents of Hong Kong who have UK passports that do not give them the right to live or work in Britain.

In Hong Kong, police fired tear gas in running battles with hundreds of protesters, some of whom stormed the legislature, destroyed pictures and daubed walls with graffiti, on the anniversary of the city's 1997 return to Chinese rule.

Police arrived by bus and moved into position as about a thousand protesters, furious at a proposed law allowing extraditions to China, gathered around the Legislative Council building in the heart of the city's financial district.

Meanwhile, a smaller, quieter and more peaceful demonstration of a couple of dozen protesters was held in London outside Britain's parliament as Hong Kong residents urged lawmakers to give them a right to stay in Britain.

"Bearing in mind that there are so many things happening in Hong Kong, we think that human rights, press freedom, freedom of speech etcetera, are all under threat," Karl Lee, a 32-year-old protester, said. "That's why many of us are thinking of relocating to the United Kingdom."

With many young people looking for routes out of Hong Kong, the campaigners say Britain should change the status of the British National (Overseas) passport, a category created after Britain returned Hong Kong to China.

Though BN(O) passports are British passports that allow a holder to visit the UK for 6 months, they do not come with an automatic right to live or work in the United Kingdom. 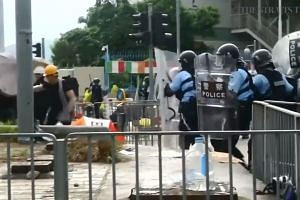 The protesters in London chanted "We are not Chinese, we are British," and Lee said the current system for passport holders was unfair.

"That's why we are urging the British government to do something to either rectify the issue or facilitate some of us who are looking to relocate here," he said.

Britain has said it wants China to abide by the 1984 Sino-British Joint Declaration, which stipulated the conditions under which Hong Kong would return to Chinese rule.

But China has warned Britain to stay out of Hong Kong affairs, and has said the declaration is a historic document with no current applicability.