BRUSSELS (AFP) - British Prime Minister David Cameron on Friday appeared to close in on a reform deal to keep his country in the EU after two days and nights of haggling with European leaders at a Brussels summit.

Lithuanian President Dalia Grybauskaite said in a tweet that a deal had been done, but two EU officials said the deal had yet to be approved by all leaders.

Cameron’s 27 counterparts have dug in their heels at the meeting, leading to marathon negotiations over changes that he wants to put before the British public in a referendum in June.

But after a day of repeated delays and frantic meetings involving leaders including Germany’s Angela Merkel and Francois Hollande of France, a draft agreement was finally expected to go before the leaders.

“The main points of the draft are a compromise, so everyone has to have given a little something,” Muscat told reporters.

Czech Prime Minister Bohuslav Sobotka, one of four Eastern European states that have objected to Cameron’s calls for limits to welfare benefits for EU migrants, was also optimistic.

He said his final talks with EU president Donald Tusk “confirmed that the draft agreement with Britain is finally on the way.”

A British official told AFP they had not seen the draft yet but were “expecting something shortly.”

The talks that started on Thursday afternoon have dragged on for more than 30 hours as Cameron cajoled his fellow leaders into supporting a deal. 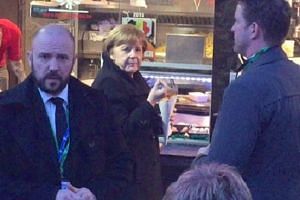 Merkel pops out for chips as Brexit summit drags on

An “English breakfast” to start Friday’s meeting of all 28 leaders was delayed to become first an “English lunch” then an “English dinner” as Tusk struggled to broker an agreement.

The delays forced Cameron to put on ice his plans to fly to London, hold an emergency cabinet meeting with ministers and announce the date of a referendum on Britain’s membership of the bloc.

“Negotiations are continuing into this evening. A Cabinet meeting won’t be possible tonight. One will be held if and when a deal is done,” the British leader wrote on Twitter.

Negotiations are continuing into this evening. A Cabinet meeting won't be possible tonight. One will be held if and when a deal is done.

French President Hollande said he would do what was needed to keep Britain in the 28-nation club, which is already struggling with the migration crisis, but warned again that it would not come at any cost.

“I’ll do what is needed to keep the United Kingdom in Europe, but on condition that Europe can still move forward,” he told French radio.

Hollande said non-euro Britain could have its own rules to regulate the City of London financial centre but that must not mean it also gets a veto over closer integration in the single currency bloc.

The other key hurdle for Cameron is eastern European countries fighting his plans to limit benefits for EU migrants which they say are discriminatory.

Brussels has offered an “emergency brake” which Britain could invoke for a limited period – still to be defined – if its welfare system is overwhelmed by the inflow of workers, as it believes it has been.

Cameron has said that without a satisfactory agreement, he will not campaign for Britain to stay in the EU in a referendum that he is expected to hold as early as June.

I'm in Brussels where I'm negotiating hard for Britain. I'm clear, I'm not prepared to take a deal that does not meet what Britain needs.

Under pressure from eurosceptics in his Conservative Party and an anti-EU popular press, Cameron wants sweeping reforms to the EU which he hopes will stop Britain from becoming the first nation to leave the bloc.

On day one of the meeting Thursday, Cameron urged his fellow EU leaders to reach a “credible” reform deal. He added that the issue “has been allowed to fester for too long” and there was now a chance “to settle this issue for a generation”.

Some European leaders warned Friday that Cameron’s dramatic approach may not pay dividends.

“The method ‘I tell you what you have to give me so that I will stay here’ is not working. (You) have to compromise,” said European Parliament President Martin Schulz.

Some nations also used tensions over the so-called “Brexit” threat to push their own demands.

A Greek government source said it wanted EU countries to promise to keep their borders open, despite Europe’s refugee crisis, until a summit planned on March 6 – or it would refuse to adopt a British deal.

Meanwhile, Belgian Prime Minister Charles Michel, who has pushed back against Cameron’s calls for an exemption from the EU’s goal of “ever closer union”, said there would be an “auto-destruction” clause to prevent other countries from capitalising on any British deal to pursue their own reforms.