PARIS (AFP) - French actress Beatrice Dalle has thrown her weight behind the "yellow vest" protest movement, saying she finds it hard to make ends meet herself.

The cult star who was catapulted to fame by the 1986 film Betty Blue told French television that she fully supports the anti-government protests after she appeared on social media wearing a high-visibility vest.

The French yellow vest protests began as a revolt over a hike in fuel prices in November but have since morphed into a populist movement against the Parisian elite and a perceived fall in living standards.

Dalle took to Instagram to support the protesters earlier this month, writing, "Up the yellow vests. Sending armoured cars as a response to the tears of the street? Shame on this government of poshos."

The actress said she too knows how difficult it was to get by on low wages.

"I do (small) independent films and subsidised theatre and I never have any money. I am not complaining compared to people who are really suffering. I am skint but I have a job that I love." 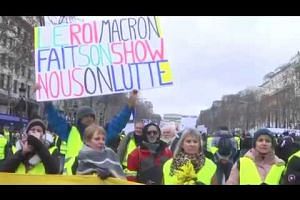 'Yellow vests' clash with police across France in protests

And she took a swipe at fellow French actresses such as Juliette Binoche, Marion Cotillard and Melanie Laurent who are vocal about the environment.

"I come from a very poor family and we weren't well enough off to be green. When you have to worry about how you are going to eat until the end of the month, it is not your preoccupation," Dalle said.

Nor does she have much sympathy with Marie Antoinette, the queen who lost her head during the French revolution.

"S***w Marie Antoinette," she told the TV programme. "She is the only French queen who didn't do anything for the poor."

Dalle, who stars in the hit French television series Call My Agent!, recently reunited on stage in a new version of The Elephant Man with her former partner, rapper Joey Starr, a man infamous for punching a monkey on a TV show.