SANDHURST, England (REUTERS) - British Prime Minister Theresa May said on Thursday (Jan 18) she was honoured that France will lend Britain the Bayeux Tapestry, an 11th century treasure that tells the story of William the Conqueror's invasion of England in 1066.

"Our shared history is reflected in the loan of the Bayeux Tapestry to the UK in 2022, the first time it will be on British soil in more than 900 years," May said in a statement as she welcomed French President Emmanuel Macron on a visit to Britain.

"I am honoured at the loan of such a precious piece of our shared history which yet again underscores the closeness of the UK-France relationship," May said.

The loan would be part of a wider cultural exchange between Britain and France over the next four years, she said.

The 70m-long work, the precise origins of which are obscure and which has not left France in its nearly 950-year known history, is currently on display in the town of Bayeux, in the northwestern French region of Normandy.

Macron told reporters that the France and Britain were now fighting wars together, a reference to cooperation between the two former European adversaries against armed Islamist movements including in countries Mali.

"We are in a way making a new tapestry together," he said. 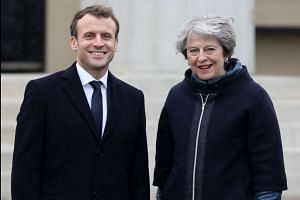 A French official said on Wednesday the loan would not take place immediately because work needed to be done on the tapestry to ensure it was safe to move it.