LONDON (BLOOMBERG) - British Prime Minister Theresa May is stepping up the government's preparations in case Brexit negotiations break down and the country crashes out of the European Union without a deal.

May is planning a top-level meeting of her Cabinet ministers early in September specifically to discuss how to ready Britain for a no-deal Brexit, according to people familiar with the matter.

Separately, a working group of senior government officials is being convened to devise ways to keep the Irish border free of customs checks and police even if there is no withdrawal agreement, one of the people said.

"Our negotiations on our future relationship have reached an impasse," May told Tory party members in a letter on Wednesday (Aug 8), published on the Conservative Home website.

She said the two options on offer from the EU - a standard free-trade deal or membership of the customs union plus an extended version of the European Economic Area - are "not acceptable to me, or to the United Kingdom."

Britain is scheduled to leave the EU on March 29 but talks between the two sides are making painfully slow progress.

Politicians on both sides have warned there is a risk that negotiations could break down, and the pound has fallen to its lowest level against the euro since October on fears of a no-deal exit. 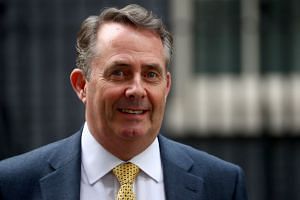 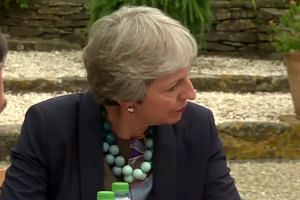 Brexit on menu as British PM May, French President Macron meet for dinner 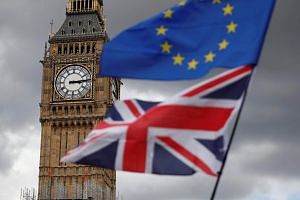 The negotiations are stuck over two key issues: May's proposals for a new free-trade area spanning Britain and the EU; and how to avoid a hard land border between the British province of Northern Ireland and the Irish Republic.

Ensuring there is no return to hard border infrastructure and customs checks at the frontier is seen as politically vital to maintain the peace on the island of Ireland.

In July, May's Cabinet agreed at a meeting at her Chequers country retreat to step up preparations for departing from the bloc without an agreement and she has reorganised the Brexit Department to focus on the task.

At the same meeting, they finalised her blueprint for Britain's trade ties with the bloc.

"This vision for our future relationship with the EU will be very challenging for the EU," May said in the letter.

"It is in no sense a concession to their demands."

Over the coming weeks, the government aims to publish 70 documents detailing what will happen to different sectors of the economy if negotiations fall apart.

On Sunday, Trade Secretary Liam Fox became the first member of May's Cabinet openly to warn that no deal is now more likely than reaching an agreement with the EU.

Some officials and ministers inside the government are growing increasingly pessimistic about the chances of getting a deal.

One of the people familiar with the planned Cabinet meeting said it could be held at Chequers, but another said this is unlikely.

The difficulty May is facing is that she needs to keep competing audiences happy.

Her own party is split between passionate Brexit campaigners, such as Fox and former foreign secretary Boris Johnson, and committed pro-Europeans, such as Chancellor of the Exchequer Philip Hammond and former attorney-general Dominic Grieve.

To make matters worse for May, she has no automatic majority in Parliament and must strike a deal with the EU that will satisfy both wings of her party, or appeal to members of the opposition Labour party. If she fails, the chances of a chaotic no-deal exit increase.

Britain is aiming to finalise the terms of the divorce later this year, and May's team now believes November is a likely month for concluding the negotiations with the EU.

If talks drag on much longer, there might not be enough time left to get the deal ratified in the EU and British parliaments before the country leaves the bloc in March.