The 180-year-old Toddbrook Reservoir, which sits above the small Derbyshire town, suffered severe damage on Thursday after days of heavy rain.

More than a 1,000 people fled as military helicopters dropped sandbags against the wall and 150 firefighters worked to drain the reservoir with pumps, the Press Association reported.

At a press conference late Friday, Assistant Chief Constable Kem Mehmet of Derbyshire said the water level had been reduced but that Derbyshire Police said there was still "a substantial threat to life" if the dam wall fails.

"We would ask residents to continue to heed police advice and stay away from Whaley Bridge," he said according to the PA. As an exception, police are allowing residents to very briefly visit their homes to care for pets.

Johnson met with some Whaley Bridge residents who had been forced to evacuate to nearby Chapel-en-le-Frith.

The prime minister described the state of the dam as "dodgy but stable" and assured them that if their homes were to be destroyed they would be "properly housed." 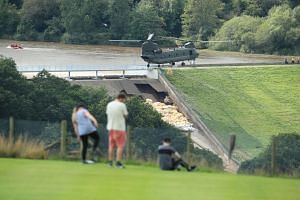 He earlier flew over the dam and met with emergency teams leading the response.

The PA quoted Julie Sharman, head of the Canal and River Trust, as saying the water level had been reduced by half a meter but still needed to go down by "several more" metres.