LONDON (REUTERS) – Britain set a hard deadline of December 2020 on Tuesday (Dec 17) to reach a new trade deal with the European Union, betting that the prospect of another Brexit cliff-edge would force Brussels to move more quickly than usual to seal an accord.

Johnson will use his control of parliament to outlaw any extension of the Brexit transition period beyond 2020 – his boldest move since winning a large majority in last Thursday’s election, and one that spooked financial markets.

In Brussels, officials said the timetable was “rigid” and likely to limit the scope of any deal.

“Our manifesto made clear that we will not extend the implementation (transition) period and the new Withdrawal Agreement Bill will legally prohibit government agreeing to any extension,” a senior government official said on Tuesday.

Asked if the government would legislate to rule out any extension of the transition beyond 2020, one of Johnson’s most senior ministers, Michael Gove, said: “Exactly, absolutely.”

After the United Kingdom formally leaves the European Union on Jan 31, it enters a transition period in which it remains an EU member in all but name while both sides try to hammer out a deal on their post-Brexit relationship.

“With absolute clarity on the timetable we are working to, the UK and the EU will be able to get on with it,” Johnson’s spokesman said.

A comprehensive free trade deal would encompass everything from financial services and rules of origin to tariffs, state aid rules and fishing, though the scope and sequencing of any future deal is still up for discussion.

Early EU responses to the move were guarded.

“We haven’t even started those negotiations but this provides for a very rigid time frame, which reflects that certain things will be out of reach,” EU Commission Vice-President Valdis Dombrovskis said.

Sabine Weyand, director-general of the EU’s trade department, told a European Policy Centre think-tank seminar that negotiations would have to focus on those issues vital to prevent “another cliff-edge situation”.

Weyand said the European Commission, which coordinates trade policy for EU countries, was ready to start negotiations very quickly after Britain formally left the EU on Jan 31 and was very clear about its priorities.

Any duty-free, quota-free deal would need to be accompanied with guarantees of a level playing field in areas such as state aid and competition, environmental and labour law and taxation. 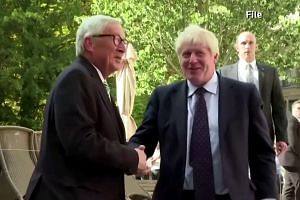 The pound fell 1.35 per cent to US$1.3154 and to 84.59 pence against the euro, levels where it had traded before the scale of Johnson’s victory became clear on Thursday evening and prompted strong gains. The pound is down more than 2 per cent from a post-election high above US$1.35 against the dollar.

By enshrining in law his campaign promise not to extend the transition period beyond next December, Johnson cuts the amount of time he has to negotiate a trade deal to 10-11 months – and possibly quite a lot less, given the time needed for UK and EU parliamentary approval of any deal.

One EU diplomat said Johnson’s proposed deadline would leave both sides worse off.

“Haste will come at the expense of services and security.

This means we are pretty much guaranteed a WTO-style exit,” the diplomat said, referring to World Trade Organisation rules that kick into force in the absence of a full-fledged trade deal.

Johnson and European Commission President Ursula von der Leyen agreed in a phone call on Tuesday to work with “great energy” to get a deal done by the deadline, the prime minister’s spokesman said.

The EU hopes to start the trade talks with Britain by March, while Britain said it wants to start as soon as possible.

Trade deals usually take many years. The fastest major trade pact the EU ever concluded was with South Korea, reached in 2009 after two-and-a-half years of negotiation. It came into force nearly two years after that.

While Johnson’s large majority gives him the flexibility to change the law if he needs to, he is sending a message to the EU - whose leaders have cautioned London that more time would be needed for a comprehensive trade deal.

TALKS WILL BE COMPLEX

If the United Kingdom and the EU fail to strike a deal on their future relationship and the transition period is not extended, trade between the two will be on WTO terms – more burdensome for businesses.

The EU insists it will not seal a trade deal with a large, economically powerful neighbour without solid provisions to guarantee fair competition. 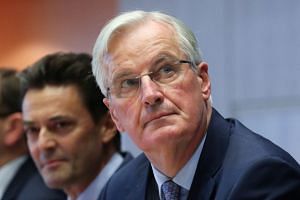 EU will do 'maximum' to meet Brexit trade deal deadline

Its demands will focus on environmental and labour standards, as well as state aid rules to ensure Britain cannot offer products on the EU’s single market at unfairly low prices.

The talks will be complex, with industry supply chains in the EU crossing borders multiple times for products such as cars and drugs, requiring agreement on exact rules to designate where products come from and thus what regulations and taxes apply.

At the same time, Britain will face US pressure to loosen rules on its agricultural and food standards as it negotiates a bilateral trade deal with Washington, another Johnson priority.

But this would overstep a red line for the EU, which would then restrict access to its market to protect its own producers.

Johnson and US President Donald Trump agreed in a phone call on Monday to pursue an “ambitious” UK-US free trade agreement.

US Trade Representative Robert Lighthizer said on Tuesday such a trade deal was a priority for Washington and that negotiations would be launched as soon as the British “get their objectives agreed to”.