LONDON (BLOOMBERG) - The British Parliament is moving closer to a plan to delay Brexit in order to stop the country dropping out of the European Union with no deal and avoid the risk of an economically damaging divorce.

He described the proposal as a "sensible" way to avoid the upheaval of a disastrous no-deal Brexit.

"I actually do believe that we are facing, with a no-deal, potentially quite catastrophic consequences for people's living standards - that's why we have said we've got to avoid it," Mr McDonnell told the BBC's Newsnight TV programme.

"I think there's a majority in Parliament for avoiding no-deal."

If Labour does support the proposal - put forward by lawmakers including Ms Yvette Cooper, a former minister - it is far more likely to win enough backing to be passed. That would force Mrs May's hand and ensure she cannot take Britain out of the EU without a deal in nine weeks' time.

Brexit is at an impasse, with members of Parliament overwhelmingly opposed to the divorce agreement Mrs May has negotiated with the EU, and time running short for delivering an orderly separation. 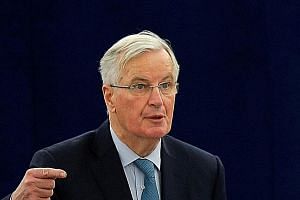 PM May under fresh pressure over Brexit process

Theresa May revises Brexit strategy in bid to break deadlock

Without Britain, the EU power balance could easily be drifting

The shrinking of Great Britain

If Parliament refuses to endorse the exit terms, Britain will be on course to fall out of the EU with no agreement on March 29 - an outcome British authorities say could deliver as much as a 25 per cent hit to the pound and a 30 per cent hit to house prices, risking a recession.

Last week, Mrs May's deal was rejected in the biggest defeat suffered by a British government in the House of Commons in recent history. In the week since she lost the vote, Mrs May has tried - and so far failed - to reach a cross-party consensus on the way forward.

The Prime Minister is pinning her hopes on persuading the EU to back down and make changes to the terms of Britain's departure. With the prospect of any significant alterations to the deal seeming unlikely, British MPs are taking matters into their own hands.

Labour's Cooper has joined forces with senior politicians in Mrs May's Conservative Party to put forward a plan that would potentially force the Premier to seek to delay Brexit by applying to extend the EU exit procedure.

With Labour's official support, such a plan will have a good chance of success when it's debated and voted on next week.

The advantage of the Cooper plan for business would be in taking a potentially chaotic no-deal split off the table.

For pro-Brexit politicians, however, removing the threat of a disorderly break-up will weaken Britain's negotiating position. Some eurosceptics say they would prefer to leave the bloc without a deal than to accept the terms Mrs May has secured.