LONDON • With a March 29 deadline fast approaching and no consensus among lawmakers on an exit deal, the British Parliament voted late yesterday (early today Singapore time) on whether to push back the country's scheduled date of departure from the European Union.

Lawmakers have twice rejected Prime Minister Theresa May's proposed withdrawal agreement by resounding margins. They hemmed her in further on Wednesday by passing a measure opposing any attempt to leave without an agreement.

Mrs May remains in power, but is seriously compromised. Many Conservatives backed the anti-no-deal motion, against her wishes, and several members of her Cabinet declined to vote against it, leading to speculation she has lost control of her party and the process.

After months of bluster and grandstanding, of threats and political backstabbing, Parliament is paralysed, meaning that lawmakers were likely to try to stop the clock before the March 29 deadline.

It was widely assumed that lawmakers would support a measure to seek a delay.

MPs were also expected to put forward alternatives through amendments to yesterday's vote, including one calling for a new referendum on Britain's EU membership, although this was not expected to pass. But if voting for a delay postpones the deadline, it also creates new problems.

First, any delay would require approval from the other 27 member states of the EU. And the big question is what sort of delay would be granted, and what it would accomplish.

EU Council chief Donald Tusk said yesterday that the bloc could approve a long postponement "if the UK finds it necessary to rethink its Brexit strategy and build consensus around it".

But other EU leaders have warned that they may not support an extension if Britain cannot be clear about what it wants.

Many experts say the EU is likely to grant an extension. Some supporters of Brexit fear that extending the deadline too far into the future could mean that the departure never happens. But a short delay would bring its own problems.

Elections for the European Parliament are scheduled to begin on May 23, so if the deadline is postponed beyond that date, Britain would be required to elect European lawmakers, even as it tried to finalise its departure from the bloc.

Moreover, it took more than two years for Mrs May's government to negotiate her deal with Brussels. 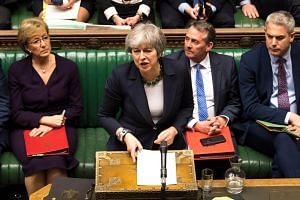 British PM Theresa May seeks way out of parliamentary impasse

If a majority somehow emerges for a new exit deal, such a proposal would have to be negotiated with Brussels, and no one thinks a new deal could be accomplished by late May, assuming Brussels would even play ball.

British lawmakers have said they oppose leaving without a deal, a prospect they say could cause catastrophic damage to the economy, chaos at ports and shortages of food and medicine. But unless they actually vote for a deal, that is still what is scheduled to happen. On its own, an extension would just change the date of the reckoning.

Mrs May has insisted that the possibility of a no-deal Brexit remains an option, arguing that to remove it from her negotiating arsenal would deny her leverage in dealing with the EU.

Still, when Parliament convened on Wednesday, she supported the motion asking lawmakers to state they were opposed to leaving the EU on March 29 unless there was a deal in place. But Parliament went one step further and voted against leaving the bloc without a deal under any circumstances, at any time - a sharp rebuke to Mrs May.

It was not the first time that members of Mrs May's own party have defied her.

On Tuesday, lawmakers soundly rejected, 391-242, the deal that Mrs May had negotiated with EU officials, including last-minute changes intended to persuade recalcitrant, pro-Brexit lawmakers who were concerned that Britain could be subject to some of the bloc's economic rules indefinitely.

The vote on Wednesday to reject a no-deal Brexit pushed the pound to its highest level since last June.

Still, the continued uncertainty could lead to more volatility in the British currency. The pound pared its gains after Wednesday night's vote by yesterday morning.

Mr Iain Begg, professor at the European Institute and co-director of the Dahrendorf Forum at the London School of Economics and Political Science, told The Straits Times: "Firms, large and small, want an end to the uncertainty caused by the political chaos around Brexit, which has deterred investment and made planning for the future relationship between the UK and the EU problematic.

"But, for the most part, they also want an outcome different from Mrs May's much derided deal, one which avoids barriers to trade with the UK's largest export market and scares off potential foreign investors. On balance, business would probably prefer an extension which ensures a closer future relationship, even if it means prolonging the agony."

A version of this article appeared in the print edition of The Straits Times on March 15, 2019, with the headline 'British lawmakers vote on whether to delay Brexit'. Subscribe
Topics:
More
Whatsapp Linkedin FB Messenger Telegram Reddit WeChat Pinterest Print Copy permalink