LONDON (WASHINGTON POST) - When politics turns ugly - as it has been the case in Brexit Britain for some time now - divisions reach deep into society.

Relatives no longer speak to each other, friendships end, and in some cases anger turns into violent extremism.

Politicians aren't immune to the fallout, either.

In almost all European nations where political tensions have erupted in recent years, legislators or ministers have become targets as some members of the public have sought to assign blame.

Lawmakers with French President Emmanuel Macron's Republic on the Move party warned of a surge in death threats amid the rise of the yellow-vest movement earlier this year.

On Wednesday (March 20), similar concerns reached the British Parliament, where Mr Lindsay Hoyle, deputy speaker in the House of Commons, urged members to be more vigilant in public as tensions over Brexit mount.

According to an e-mail leaked to news site Politics Home and the BBC, Mr Hoyle wrote to members of Parliament: "We can also take simple steps to improve our personal safety by travelling home from the House by taxi or with colleagues in the coming days. The Serjeant at Arms has made provision for black cabs to collect from within the estate." 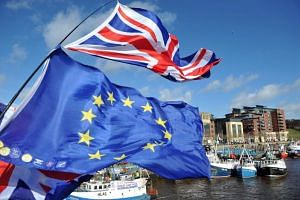 As the clock ticks on Brexit, Japan warns of irreversible damage from political disarray

"I have never felt this level of tension during my time in the House and I am aware that other colleagues feel the same," Mr Hoyle wrote.

The e-mail was sent out the same day that British Prime Minister Theresa May blamed Parliament for the deadlocked Brexit situation.

Mrs May's comments drew angry responses from members of Parliament, who are expected to vote next week for a third time on the Prime Minister's deal to leave the European Union.

In a remarkable response, the Speaker of the House of Commons, Mr John Bercow, told MPs: "None of you is a traitor. All of you are doing your best."

"I believe passionately in the institution of Parliament, in the rights of members of this house, and in their commitment to their duty... The sole duty of every member of Parliament is to do what he or she thinks is right," Mr Bercow said.

Mr Bercow's rejection of the Prime Minister's accusations bore some similarities to the fallout from an infamous November 2016 Daily Mail headline, which called three high court judges "enemies of the people".

The judges had ruled that the government needed Parliament to trigger Britain's exit from the European Union.

Critics of the Daily Mail headline feared that the rhetoric, which was also used by the Nazis, could expose the judges to attacks and harassment.

This week's blame game in London, amid heightened concerns over lawmakers' safety, once again reflected deeper questions over how populist rhetoric, policies and headlines have created a more toxic political environment.

More moderate politicians and analysts have largely blamed the divisions on right-wing parties such as the UK Independence Party, France's National Rally (previously known as National Front) and Germany's Alternative for Germany (AfD).

But those parties have similarly faced the fallout of the more heated political landscape they helped create.

In January, a regional AfD leader was assaulted in the city of Bremen in what authorities called a "politically motivated" attack.

Chancellor Angela Merkel and members of all parties condemned the attack, which left AfD politician Frank Magnitz with serious injuries.

"Today is a dark day for democracy in Germany," the far-right AfD said in a subsequent statement.

While right-wing populists and more moderate members of Parliament may agree that violence should be condemned in all cases, finding common ground on a solution has appeared more difficult.

In response to recent attacks and threats, MPs across the political spectrum have urged more restraint.

But public disagreement and blaming others are inherent to any political system, and especially so in Britain, which has long prided itself on parliamentary discourse that may appear harsh to some, but that has also put the government under greater scrutiny.

With public discourse unlikely to change, the focus is increasingly turning toward law enforcement.

When a team of researchers with the North and West London Forensic Services examined threats against British politicians in 2015, it concluded that MPs and their staffers often failed to flag threats or harassment incidents that may potentially pose serious risks.

"Intrusive behaviours towards MPs," the researchers wrote, could help detect "lone actors who frequently exhibit 'warning behaviours' in the form of intrusive/aggressive behaviours before they carry out a definitive act."

Flagging those incidents earlier and more frequently could help to single out individuals who may be prone to turning to violence, the report argued.

That warning came too late for British MP Jo Cox, who was shot and stabbed by a right-wing extremist in June 2016 as she was on her way to meet constituents days before the Brexit referendum.

After Ms Cox died at the scene of the attack, all sides halted their Brexit campaigns almost immediately.

One week later, Britain voted to leave the European Union, paving the way for one of the most politically divisive projects in contemporary European history.