LONDON • British factories stockpiled goods last month at the fastest rate since records began in the early 1990s as they braced themselves for a potentially chaotic Brexit in less than two months' time, a business survey showed yesterday.

While better than the similar readings of manufacturing in France and Germany, the outperformance of British factories was driven by a surge in demand for stockpiling materials ahead of Brexit, said survey compiler IHS Markit.

The findings add to evidence that, as politicians remain deadlocked, firms are increasingly protecting themselves against the risk of Britain crashing out of the European Union on March 29 without new trading arrangements in place.

Companies are stockpiling everything from medicines and textbooks to ice cream and prosecco.

The biggest supermarket companies this week warned the government of significant disruption and rising food prices if there is a no-deal outcome.

The fact that there is still at least some positive growth is almost certainly down to the biggest reading for inventory building in the survey's 27-year history.

The British pound slipped against the United States dollar after the PMI fell to 52.8 from 54.2 last December, a three-month low and below the consensus forecast in a Reuters poll of economists for 53.5.

The stocks of purchases index rose to the highest level seen in a Group of Seven country.

"The fact that there is still at least some positive growth is almost certainly down to the biggest reading for inventory building in the survey's 27-year history," ING economist James Smith said. "After all, we are so close to Brexit day and an economically disruptive 'hard' Brexit remains firmly on the table."

Prime Minister Theresa May, under pressure from her own Conservative Party, wants to reopen a Brexit treaty with the European Union to replace a contested Irish border arrangement, something Brussels has rejected.

Investors have urged the government to ensure an orderly exit from the club it joined in 1973.

Almost one in three British firms is thinking of moving some operations abroad because of Brexit, a survey from the Institute of Directors industry body showed yesterday. 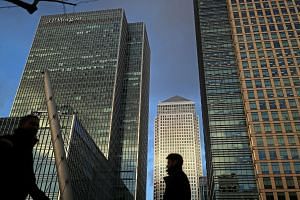 US banks moving some London staff ahead of Brexit deadline

A matter of life and death? UK stockpiles drugs as fear of no-deal Brexit rises

IHS Markit said there was a "clear risk" that the manufacturing sector - accounting for 10 per cent of British economic output - will go into recession.

Export orders were flat, the PMI showed, reflecting a slowdown in the global economy.

These are among the last key data points before the Bank of England announces its next interest rate decision and forecasts next Thursday.