The nation's shock June 23 vote to leave the European Union will "change the course of Britain's history", Chancellor of the Exchequer Hammond said in his Autumn Statement, exactly five months after the Brexit referendum.

Gross domestic product was expected to grow by only 1.4 per cent next year - sharply down from the prior estimate of 2.2 per cent given in March.

"That is slower of course than we would wish, but still equivalent to the IMF's forecast for Germany, and higher than the forecast for growth in many of our European neighbours, including France and Italy," Mr Hammond told lawmakers.

He noted, however, that the UK economy was predicted to have expanded by 2.1 per cent this year, up from the government's previous estimate of 2.0 per cent. 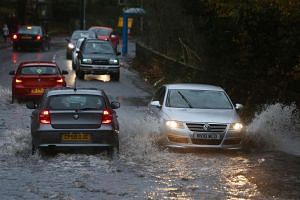 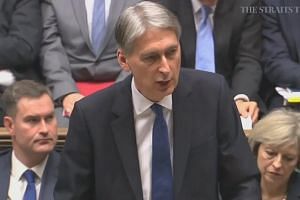 In a keenly-awaited Budget, he unveiled a package of UK-wide investment projects, including the building of homes and road improvements.

While viewed as a government attempt to trim of years of austerity triggered by the 2008 global financial crisis, Mr Hammond confirmed he had abandoned predecessor George Osborne's aim of a Budget surplus by 2019/20.

"In view of the uncertainty facing the economy, and in the face of slower growth forecasts, we no longer seek to deliver a surplus in 2019-20," Mr Hammond said.

But the government remains "firmly committed to seeing the public finances return to balance as soon as practicable, while leaving enough flexibility to support the economy in the near term", he added.

The British economy has remained resilient since the referendum, even as a cut in the Bank of England's main interest rate to a record-low 0.25 per cent has contributed to a slump in the pound.

Some experts have warned however that a heavy blow could fall on the UK economy once divorce proceedings with the rest of Europe begin.

Prime Minister Theresa May has vowed to trigger Britain's exit from the European Union by the end of March by activating Article 50 of the EU's Lisbon treaty, which begins a two-year countdown to leaving the bloc.

As Mr Hammond addressed the nation, a small group of pro-Brexit demonstrators were gathered outside Parliament demanding Article 50 be triggered immediately.

Plans to ban certain costs incurred by renters of residential properties has already had an impact, with share prices of estate agents slumping in trading on Wednesday.

The chancellor also announced a rise in the minimum wage to £7.50 an hour in April from £7.20.

And he confirmed a plan to cut corporation tax to 17 per cent by 2020 from the current 20 per cent.

Over the weekend, Mrs May announced fresh investment in research and development, hiking the government's spending by £2 billion annually until 2020.

Investments will be rolled out through a new fund that will prioritise technologies including robotics, industrial biotechnology and medical technology.