LONDON (REUTERS) – Wikileaks founder Julian Assange lost one legal bid to have a UK arrest warrant against him quashed on Tuesday (Feb 6) but immediately launched another, to have the British authorities halt any action against him on public interest grounds.

Judge Emma Arbuthnot said she would give her decision on Feb 13.

A ruling in Assange’s favour could pave the way for him to leave the Ecuadorean embassy in London where he has been holed up for over five years.

Assange, 46, entered the embassy in an apartment in the wealthy district of Knightsbridge to avoid extradition to Sweden to face an allegation of rape, which he denied. The Swedish case has since been dropped.

He has said he feared Sweden would hand him over to the United States to face prosecution over Wikileaks’ publication of leaked US military and diplomatic documents.

As things stand, if he were to leave the embassy, he would face arrest by British police for breaching bail conditions when he fled there instead of handing himself in to be sent to Sweden.

Judge Arbuthnot rejected a legal argument to have the arrest warrant against him quashed on the basis that with the Swedish case dropped there was no longer any justification for it. 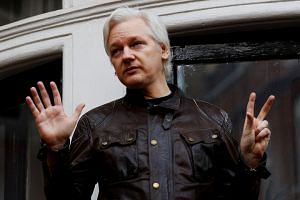 “I am not persuaded that the warrant should be withdrawn,”Arbuthnot, the chief magistrate of England and Wales, said during the hearing at Westminster Magistrates Court.

Assange’s lawyer Mark Summers then launched a separate argument that even if his client were arrested and brought to court, it would not be in the interests of justice to take any further action.

He said Assange had had “reasonable grounds” for fleeing to the embassy in 2012 because of his fear that he would be ultimately be extradited to the United States.

“The last 5-1/2 years he has spent might be thought adequate, if not severe punishment for the actions he took,” he added.

FEARS EXTRADITION TO US

To his supporters, Australian-born Assange is a cyber hero who exposed government abuses of power. To his critics, he is a criminal who undermined the security of the West and endangered lives in many countries by exposing secrets.

His supporters say his health has deteriorated significantly during his years in the embassy, and the London court heard he had suffered depression, dental and shoulder problems.

“His health issues are not that bad,” said Arbuthnot.

Should she rule in Assange’s favour next Tuesday, it remains unlikely however that he will leave the embassy immediately.

That is because he fears that with the Swedish issue out of the way, the United States will unseal charges against him and that the British authorities would arrest him under a US extradition warrant.

His supporters hope that a court victory will force the British authorities to disclose whether such a warrant has been issued by the US authorities.

His lawyer Jennifer Robinson said in a statement: “We must confront the real issue in this case – if Julian Assange walks out of the embassy today, he risks facing extradition to the US to face prosecution for publishing information in the public interest with Wikileaks.”

“Mr Assange remains ready to face British justice ... but not at the risk of being forced to face American injustice...”