LONDON (REUTERS) - A full hearing in a case that pits the ruler of Dubai Sheikh Mohammed bin Rashid al-Maktoum against his wife, a Jordanian princess, over the welfare of their two children will be heard on Nov 11 in an English court, a judge said on Wednesday (July 31).

The two parties said in a statement earlier this month the legal battle was related to the welfare of their children but did not concern divorce or finances. Princess Haya bint al-Hussein is estranged from her husband.

In proceedings disclosed on Tuesday, Princess Haya, the 45-year-old daughter of the late King Hussein of Jordan and half-sister to present King Abdullah, asked London's High Court to protect one of her children from a forced marriage and to grant a non-molestation order, a type of injunction that protects against harassment or threats.

Wednesday's hearing, which Haya attended, was held in private and the details cannot be reported.

When asked about the court proceedings on Tuesday, an official at the London embassy of the United Arab Emirates said: "The UAE government does not intend to comment on allegations about individuals' private lives".

The 70-year-old sheikh, who is also vice-president of the UAE, married the princess, a former member of the International Olympic Committee, in 2004 in what was believed to be his sixth marriage.

He has more than 20 children by different wives.

Princess Haya, who competed in equestrian jumping in the 2000 Olympics in Sydney, has often attended Britain's Royal Ascot horse races with Sheikh Mohammed. 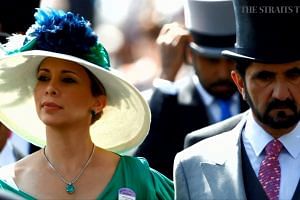 Jordan is staying silent about the legal battle between Princess Haya and Sheikh Mohammed, as King Abdullah seeks to contain any fallout from a case involving his half-sister and a vital Gulf ally.