LONDON (AFP) - Britain on Thursday (March 22) marked the one-year anniversary of the terror attack on Westminster Bridge, the first in a series of assaults in the UK in 2017 that killed dozens of people and left scores injured.

On March 22 last year, Khalid Masood, a 52-year-old British convert to Islam, drove a car at pedestrians on the bridge over the River Thames in the heart of the London, before fatally stabbing a policeman on guard outside Parliament.

The attack left five people dead and around 50 injured, and only ended when police shot Masood dead.

The Islamic State in Iraq and Syria (ISIS) group claimed responsibility, but investigators have said they found no evidence of an association.

The incident mirrored truck attacks in Europe, including the 2016 Bastille Day assault in Nice that killed 86 people, and a similar attack months later on a Christmas market in Berlin that claimed 12 lives.

Mourners left flowers at the scene on Thursday, with one note reading; "Kurt, taken too soon, but never forgotten - RIP Much love, Sandy", in tribute to US musician Kurt Cochran, who died in the attack. 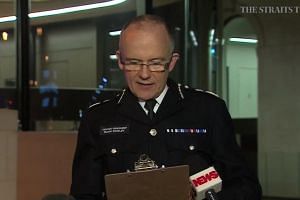 London attacks: How the events unfolded at the heart of British government

"It's very moving," Mr Mick Hodges, 67, who had travelled from the East Midlands to pay his respects, told AFP. "Our thoughts are with the families and also the people that acted so bravely that day, trying to revive the people."

In the House of Commons on Wednesday, Prime Minister Theresa May praised the "exceptional bravery of our police and security services", while MPs on Thursday held a minute's silence.

With Mrs May in Brussels on Thursday, Interior Minister Amber Rudd and Leader of the House of Commons Andrea Leadsom attended a commemorative event in Parliament's Westminster Hall.

Mr Sadiq Khan, the mayor of London, has announced plans for the hashtag "LondonUnited" to be displayed at the locations targeted on the anniversaries of each attack, with the phrase projected onto the Houses of Parliament on Thursday.

A 3D installation of #LondonUnited will also be located at City Hall, home to Mr Khan's devolved administration, where the public will be able to pay their respects and sign a "digital book of hope".

Mr Khan said the commemoration was drawn up after consultation with 14 bereaved families, survivors, the emergency services and local councils.

"Londoners will never forget the horrific terror attacks on our city in 2017," the mayor added in a statement.

"These were not only attacks on our city and our country, but on the very heart of our democracy and the values we cherish most - freedom, justice and tolerance."

Police officers and others observed a minute's silence at 9.33am, which corresponds to 933, the number of slain officer Keith Palmer.

"They are talking of naming the gates after the policeman which I think is a very nice tribute to him, let him be remembered forever," said well-wisher Christine Fernbank, 80.

Mrs Theresa May's government has called for people to remain vigilant, while Britain's threat level for international terrorism is set at severe, meaning an attack is "highly likely".

In 2017, British anti-terrorism officials received some 31,000 reports by telephone or Internet, according to the authorities.

Just over a fifth of this information was used by the police in investigations, or added to their terrorism databases.

He said the tempo of counter-terrorism operations was the highest he had seen in his 34-year career at MI5.

One year on from the March 22 attack, 27-year-old victim Francisco Lopes recalled being "close to death".

Since being hit by Masood in the attack, he has suffered from post-traumatic stress and had to stop working.

"I'm happy to be alive but it changed me," he told London's Evening Standard newspaper.

The attack has also prompted the authorities to strengthen London's security apparatus.

"This includes barriers at crowded locations, such as eight bridges in London," said spokesman for the Metropolitan Police.

Professor Jon Coaffee, of the University of Warwick's department of political and international studies, told AFP: "More public spaces and transport infrastructure have been protected by ad hoc concrete blocks or metal barriers."