LONDON • The British Parliament's vote on Prime Minister Theresa May's Brexit deal will go ahead on Tuesday, her office said yesterday, despite a report stating that ministers had sought a delay to prevent a huge defeat that could bring down the government.

Mrs May has repeatedly said that if lawmakers reject her deal with Brussels, which would see Britain exit the European Union on March 29 with continued close ties, the only alternatives are leaving without a deal or reversing Brexit.

Parliament is mid-way through a five-day debate on the Brexit deal, ahead of the crunch vote which will define Britain's departure from the EU and could determine Mrs May's future as leader. She looks set to lose that vote.

The Times newspaper says that senior ministers are urging Mrs May to delay it for fear of a rout.

But her spokesman has said the vote will take place on Tuesday as planned. The House of Commons leader Andrea Leadsom also told Parliament the vote would go ahead on Tuesday.

The day before the vote, the EU's top court will deliver a judgment on whether Britain can unilaterally halt Brexit.

EU negotiator Michel Barnier yesterday said the only deal available was the one agreed with Brussels. "The agreement that is on the table - the withdrawal agreement and the agreement on the future relationship - are, in our view, the only and best possible to organise an orderly withdrawal," he said. 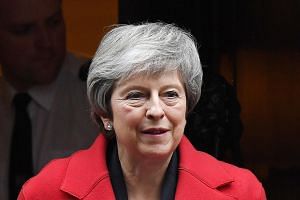 Mrs May used an interview on BBC Radio yesterday to press on with her bid to persuade lawmakers to back her deal, saying: "There are three options: One is to leave the EU with a deal... the other two are that we leave without a deal or that we have no Brexit at all."

During the first two days of debate, at least 15 of Mrs May's own lawmakers explicitly said they intend to vote against the deal.

In one small potential change, Mrs May said she was speaking to lawmakers about giving Parliament a bigger role in deciding whether to trigger a so-called Northern Irish backstop.

Concerns about the backstop are a key driver of opposition to the deal among both Mrs May's own Conservative lawmakers and the Northern Irish Democratic Unionist Party, which props up her minority government.

Supporters of a clean break with the EU said the backstop, intended to ensure no hard border between British-ruled Northern Ireland and the EU-member Irish Republic, could leave Britain forced to accept EU regulations indefinitely.

They also said it could result in Northern Ireland being treated differently from the rest of Britain.

A version of this article appeared in the print edition of The Straits Times on December 07, 2018, with the headline 'Brexit vote to go ahead on Tuesday'. Subscribe
Topics:
More
Whatsapp Linkedin FB Messenger Telegram Reddit WeChat Pinterest Print Copy permalink