BRUSSELS (BLOOMBERG) - European Union (EU) officials were fairly sure the draft Brexit deal they published on Wednesday (Feb 28) would be unacceptable to British Prime Minister Theresa May.

That is because a large plank of their strategy is to be inflexible and to put so much pressure on the British government that it will eventually decide to keep the UK as close to the EU as possible, according to three people familiar with the EU's thinking.

For some EU decision-makers, that means they still hope that when the UK sees how bad the deal on offer is, they will opt to remain in the bloc, possibly through a second referendum after Parliament has voted the deal down.

Others think this might happen when the UK has already departed and the country will stay in an endless transition period.  It is why the bloc's two most important leaders, European Commission President Jean-Claude Juncker and European Council President Donald Tusk, have both in recent weeks raised the prospect of the UK changing its mind or being let back in.

They know that might not happen. But it is why the EU is driving a hard bargain and saying the only real alternative is a trade deal that is no better than the one Canada got from the bloc.

If the UK will not bend to EU rules - taking rules it has no say in making - it will not give it the benefits of access to the bloc's single market.

Among the options of keeping the UK in the EU's sphere is to remain in the bloc's customs union, a position backed this week by Labour leader Jeremy Corbyn.

A customs union is a distant second-best to the single market for businesses, but at least smooths trade and would keep the Irish border invisible. 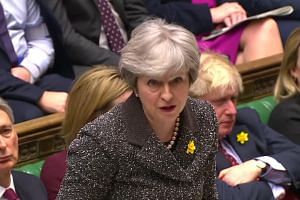 "I've met Mr Corbyn on three occasions and together with his team, those have always been very useful discussions," Barnier said on Wednesday. "On the customs union, this might be an element of the future relationship - but we'll see what the position of the UK Government is first - that offers a significant part of the solution for Ireland."

For now, the EU and and the UK must agree on the precise wording of the text to give enough time for both sides to ratify it before Britain's leaves on March 29, 2019.

Here are the main details:

It's the draft version of the treaty that includes matters of Britain's separation from the bloc - such as what to do about the Irish border - and the possible transition period. The EU says it reflects the interim deal reached with the UK in December. On the transition, and other topics that have not been agreed, the draft merely sets out the EU's position.

The language could still be toughened or weakened at the request of the EU's 27 remaining member states over the next few weeks. It will then continue to be worked on by EU and UK negotiators with the aim of getting an agreement before the end of the year.

The UK wants a political agreement on the transition reached in March, but there is no hard and fast deadline on that as far as the EU is concerned.

3. WHAT DOES IT SAY ON THE IRISH BORDER?

The agreement in December gave three options for dealing with the Irish border. The draft focuses on the "fallback option" which would mean that Ireland and Northern Ireland will have to remain aligned in many areas of trade and regulation, something that is a red line for PM May.

Between Northern Ireland and mainland Britain, "in ports and airports there will be controls, but I will not refer to it as a border", Barnier said.

A container ship from a UK port to the Republic of Ireland could be checked in Belfast, an EU official said. These would probably be carried out by UK customs officials under the authority of the EU.

4. WHEN WOULD THE FALLBACK OPTION TAKE EFFECT?

An EU official said it is almost certain that the option will be included in the final deal to be approved before Brexit day, but there is time to "come up with a better solution".

It would start operating at the end of Britain's transition period (penciled in for the start of 2021) if the UK-EU trade deal is not ready by then or if it is not enough to eliminate a hard Irish border. That is why it is so controversial.

5. How long will the transition period last?

The UK wants longer but has not proposed a date.

The UK on Wednesday announced it accepted some of the EU's demands on how it was treating European citizens who move to the UK during the transition period which could pave the way to a deal.

According to the draft, the EU can suspend some of the UK's rights during the transition if the EU thinks the EU has not fulfilled its obligations.

7. WHAT ROLE WILL EUROPEAN JUDGES HAVE?

The withdrawal agreement will be upheld by a joint committee comprising representatives from the EU and the UK.

If the committee cannot resolve a dispute, it can ask the European Court of Justice for a ruling. Its rulings would be binding on the UK and EU.