LONDON (AFP) - With no previous political experience, Ms Jessica Simor and Mr James Wells are both candidates in the upcoming European elections for rival parties born out of the divisive Brexit debate that is shaking up politics in Britain.

Just two months ago, 46-year-old Mr Wells was a civil servant working on trade data at the Office for National Statistics.

Now, he is standing in elections that were never planned because Britain was meant to be already out of the EU.

The catalyst for him was his participation in a protest march from northern England to London organised by the pro-Brexit campaign group Leave Means Leave.

The marchers reached London on March 29 - the day on which Britain was meant to have left the European Union but did not because of a deadlock in parliament.

"I met some amazing people on the march that really inspired me and it was then that I kind of realised I wanted to do more than just protest, send letters to my MP and shout at the TV every night," he said.

Mr Wells was chosen as a candidate just a couple of weeks after writing in to the Brexit Party and then resigned as he would not have been able to stand otherwise. 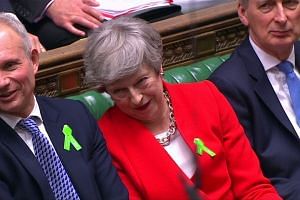 "It has been all a bit of a whirlwind," he said.

A father of two children aged 6 and 9, Mr Wells said he had taken "a big gamble" by presenting himself.

Even if elected, he may only sit for a few weeks in the European Parliament before Britain leaves the bloc.

If he loses, he will be looking for another job.

'PEOPLE ARE FED UP'

On the other side of the political spectrum, Ms Simor, a 51-year-old lawyer, is standing for Change UK.

Like the Brexit Party, Change UK is a newcomer on the political scene and was only created a few months ago.

The two new parties now each claim around 100,000 members.

Ms Simor said the party was doing well in London, which voted nearly 60 per cent in favour of staying in the European Union in the 2016 referendum.

"There is massive desire for Remain in London... People are very positive, they want to stop this," she said.

She added that "our objective in this campaign is not to persuade people but to get people to vote".

Ms Simor had originally sought to fight Brexit in court, working on a case to prevent the government launching Brexit talks without first consulting parliament.

"Then these elections happened and it seem to me an opportunity for more voice within that argument," she said.

Ms Simor, who has two children aged 14 and 17, began leafleting outside London Underground stations and attending political meetings in pubs.

"I thought it would be really quite boring but it is really fun and really interesting," she said.

They may not be recommending the same remedy but Ms Simor and Mr Wells agree on the diagnosis.

"People are fed up with their MPs and the two-party political system and people want change," Mr Wells said.

Ms Simor said: "The Conservative Party and the Labour Party need to fall into pieces. We need a new system".

The two parties are far from equal in the polls, however.

The Brexit Party is currently expected to win around 30 per cent of the vote, while Change UK is on just 5 per cent.