BELFAST/LONDON (REUTERS/AFP) - Britain’s new Prime Minister Boris Johnson held talks in Northern Ireland on Wednesday (July 31) in a bid to untangle an impasse over the Irish border “backstop” that has scuppered all efforts to secure an orderly withdrawal from the European Union.

Plans for the border have become the most contentious issue in negotiations with the EU, and the British pound has tumbled in recent days as Johnson said Britain would leave without a deal on Oct 31 unless the backstop was scrapped.

He told Northern Irish parties on Wednesday he would stand by the government’s commitment to the Irish peace agreement and a pledge not to return to a hard border whatever the result of Brexit, a spokeswoman said.

“The discussions also included Brexit, where the prime minister made clear that the UK would be leaving the EU on October 31st come what may, and restated his intention to do so with a deal,” the spokeswoman said in a statement.

“He said that in all scenarios, the government is steadfast in its commitment to the Belfast-Good Friday Agreement and that in no circumstances would there be physical checks or infrastructure on the border.”

The head of Irish nationalist party Sinn Fein, Mary Lou McDonald, said she warned Johnson that leaving without a deal would be catastrophic for the economy and the 1998 peace deal that ended three decades of violence in the region. Some 3,600 people died in sectarian violence commonly known as The Troubles.

Johnson began his trip with talks on Tuesday evening with the leadership of the Democratic Unionist Party, the largest pro-British party in the region whose 10 members in the Westminster parliament prop up the Conservative government.

Johnson: It's crucial to get Northern Ireland government running again

After the meeting DUP leader Arlene Foster repeated Johnson’s demand that the backstop, designed as an insurance policy to prevent border controls between Ireland and Northern Ireland, be scrapped.

“It is very important that the backstop goes,” she said.

But a senior DUP lawmaker also at the meeting said possible compromises were discussed – specifically the possibility of putting a time limit on the backstop and other “pragmatic solutions.”

Asked if Johnson’s was responsive to the suggestion, DUP’s Jeffrey Donaldson told Irish radio RTE that he would not “negotiate in public on this.”

Johnson told Ireland's prime minister Leo Varadkar on Tuesday that the "backstop" plan was unacceptable, putting him at odds with both Dublin and Brussels, which insists the deal is not open for renegotiation. 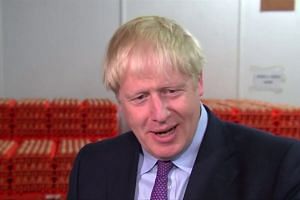 "If they really can't do it then clearly we have to get ready for a no deal exit," Johnson said on a trip to Wales, adding: "It's up to the EU, this is their call."

Varadkar has said that Johnson's plan to renegotiate the deal by a deadline of Oct 31 was "totally not in the real world".

Speaking to journalists ahead of the talks in Northern Ireland, Johnson ’s said Brexit would be on the agenda but said he wanted a quick restoration of Northern Ireland’s suspended power-sharing executive. It is a critical part of the 1998 peace agreement that ended 30 years of conflict.

The power-sharing administration was suspended two-and-a-half years ago because of differences between the parties representing mainly Protestant pro-British unionists and mainly Catholic nationalists who favour a united Ireland.

“The people of Northern Ireland have been without a government, without Stormont for two years and six months so my prime focus this morning is to do everything I can to help that get up and running again,” Johnson told journalists.

A couple of dozen protesters held a rally against Brexit while the talks continued.

Leaving without a deal would throw the border status into confusion and threaten economic catastrophe for Ireland, cutting it off from its main trading partner.

Johnson pledged to Varadkar on Tuesday there would be no physical checks on the border, whatever happened.

Brexit supporters believe electronic checks can take place away from the frontier, but no viable plan is close to being agreed.

Varadkar said on Friday that a no deal would make a unification of British Northern Ireland and the Republic of Ireland more likely.

"People who you might describe as moderate nationalists or moderate Catholics who were more or less happy with the status quo will look more towards a united Ireland.

"And increasingly you see liberal Protestants, liberal unionists starting to ask the questions as to where they feel more at home," Varadkar said.

Northern Ireland is not the only country whose status as a member of the United Kingdom after Brexit is under the spotlight.

Sturgeon said last week that Scotland, which voted to remain in the EU in the 2016 referendum, needed an "alternative option" to Johnson's Brexit strategy.

He also visited Wales on Tuesday as part of the whistlestop tour of the United Kingdom, designed to signal his commitment to keeping the union whole after Brexit.