BERLIN (WASHINGTON POST) - The Tunisian man who plowed a truck into a Berlin Christmas market had lived under 14 aliases and was so well known to German officials that a key counter-terrorism committee discussed his case seven times, suggesting the scale of the missed opportunities to thwart the Dec 19 attack.

The fresh details about Anis Amri - shot dead in Italy four days after the attack - emerged on Thursday (Jan 5) during testimony in the regional parliament of North-Rhine Westphalia, where the suspect once lived.

German officials have already said that Amri had previously been flagged as a terrorism threat. But Mr Ralf Jäger, the state's interior minister, described for lawmakers in Düsseldorf how the Joint Counter-Terrorism Centre, an institution coordinating the work of Germany's security agencies, had discussed his case repeatedly.

He also said that six months of surveillance had yielded nothing concrete, suggesting an operative highly skilled at hiding his resolve, or a lapse in German law enforcement to adequately monitor him.

Speaking to reporters on the day of the hearing, Mr Jäger said that German officials felt they did not have enough on Amri to detain him. 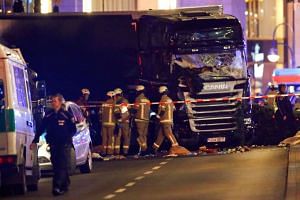 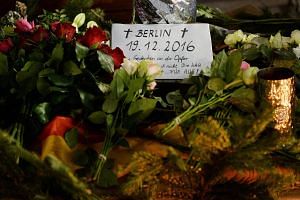 What we know so far about Berlin Christmas market attack 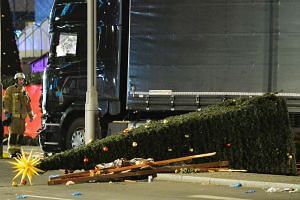 "We live in a legal state, where suspicion and hearsay do not suffice to take someone into custody," he said. "And I think that is a good thing. A legal state needs to demonstrate in a court-proof manner that someone is planning a concrete crime."

The case has become the latest example of stumbles by European authorities in the handling of terrorism suspects and has fueled more criticism of Chancellor Angela Merkel's decision to open the door to more than one million asylum seekers, many of whom where inadequately screened, security analysts say. After a string of attacks in 2016, she described Islamist terrorism last week as being Germany's "greatest threat."

German authorities are continuing the search for possible accomplices in the December attack. On Tuesday, they arrested a 26-year old Tunisian man at a Berlin migrant shelter, saying he had met Amri at a restaurant and had "intense" conversations with him around 9pm on the night before the attack.

The Germans were not the only ones facing questions. Amri appears to have travelled across at least four neighbouring countries before being shot by the Italian police four days after the attack.

Security footage at Berlin's Zoo train station showed him holding his index finger into the camera. Two days later, he was filmed in the Dutch city of Nijmegen, according to Ms Frauke Köhler, spokesman for the federal attorney general's office. He was believed to have arrived there from Brussels via Amsterdam.

Yet, despite an international manhunt, Amri somehow managed to get as far as Milan in Italy, where two Italian officers questioned him, thinking he was a burglar. After he pulled a gun, they engaged him in a firefight. One officer was wounded, and Amri was shot dead.