BRUSSELS (AFP) – Belgium has charged two new suspects in connection with the Paris massacre last month, prosecutors said Thursday (Dec 3), bringing to eight the number of people it is holding in the case.

“Two other suspects have been charged... in the framework of the Paris attacks,” a spokesman for the prosecutor’s office told AFP, confirming reports that the two had been arrested on Sunday (Nov 29).

Flemish public television VRT said one of the suspects knew Bilal Hadfi, one of the suicide bombers who blew himself up at the French national stadium north of Paris.

The suspect, a 20-year-old Frenchman, was held for questioning at Zaventem airport, northwest of Brussels, as he prepared to board a flight to Morocco, the broadcaster said. 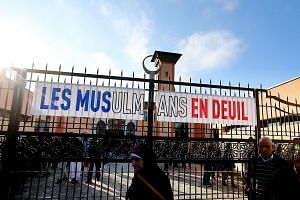 The second suspect, a 28-year-old Belgian, was arrested in the Brussels district of Molenbeek, where several of the Paris attackers resided, including suspected ringleader Abdelhamid Abaaoud who was killed in a raid by French police.

Since the investigation opened, six other suspects have been charged in connection with the Nov 13 attacks that left 130 people dead at the stadium, in a concert hall as well as restaurants and cafes across the French capital.

Among those held are Mohammed Amri and Hamza Attou who are suspected of having brought back to Brussels Salah Abdeslam, who investigators think played a vital logistical role in the massacre.

Another of those charged, Ali Oulkadi, allegedly drove the key suspects around the Belgian capital while traces of blood and two handguns were found inside a vehicle of a fourth suspect, Lazez Abraimi.

The identity of the fifth suspect has not been revealed but Belgian media said it is Abdeilah Chouaa, whose link with the attacks remains unknown.

Belgian media have named the sixth suspect as Mohamed Bakkali, who is believed to be the owner of a home in the southern town of Auvelais that had served as a hideout until it was raided Nov 26.

He was charged the following day “with terrorist murder and with participating in the activities of a terrorist group.” The police meanwhile Thursday (Dec 3) released two other people who were questioned as witnesses following raids in Brussels.