LONDON (AFP) - The Bank of England on Thursday (Feb 7) slashed its forecast for UK growth this year to 1.2 per cent from 1.7 per cent, blaming the downgrade on a global economic slowdown and "the fog of Brexit".

"UK economic growth slowed in late 2018 and appears to have weakened further in early 2019," the central bank said after keeping its main interest rate at 0.75 per cent.

"This slowdown mainly reflects softer activity abroad and the greater effects from Brexit uncertainties at home," it added.

Bank of England governor Mark Carney warned that Britain was "not prepared" for a no-deal Brexit.

"Although many companies are stepping up their contingency planning, the economy as a whole is still not yet prepared for a no-deal no-transition exit," Carney told a press conference to elaborate on the BoE's latest forecasts.

"The fog of Brexit is causing short term volatility in the economic data and more fundamentally it is creating a series of tensions in the economy. Tensions for business," he added.

The European Union and Britain agreed to hold further talks to try and save their Brexit deal, after May met European Commission head Jean-Claude Juncker in Brussels on Thursday.

Plans for Britain to leave the EU on March 29 under a withdrawal agreement signed last year were thrown into doubt when British lawmakers overwhelmingly rejected the accord last month.

Meanwhile should British GDP come in at 1.2 per cent, it will be the country's weakest output in a decade.

"The economic outlook will continue to depend significantly on the nature of EU withdrawal," it added. 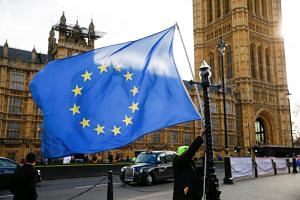 What Brexit legislation does Britain still need to pass before exiting the EU? 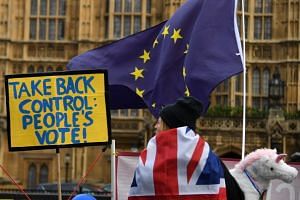 Campaign for second Brexit vote goes down to the wire

"The pound has dropped to its lowest (dollar) level in almost three weeks... although it should be stated that the market reaction is fairly muted," noted XTB analyst David Cheetham.

The IHS Markit/CIPS UK services purchasing managers' index (PMI) fell to 50.1 - the lowest level in two and a half years - down from 51.2 a month earlier.

A PMI reading above 50 indicates growth.

Concerns about Britain's impending departure from the EU dampened demand and caused firms to delay making decisions on new projects.

The news followed disappointing PMI readings for the manufacturing and construction sectors in January.

Britain is meanwhile not alone in experiencing a cooling economy.

The European Commission on Thursday sharply cut its 2019 eurozone growth forecast on an unexpected slowdown in Germany and protests in France.

In the US, the Federal Reserve last month left its key lending rate unchanged and said it would be patient about making any further changes, in a clear signal that the central bank has heeded concerns about the economy.

A slowdown to China's economy has also rattled markets in recent months.