ROME (AFP) - A blast of Siberian weather dubbed "The Beast from the East" sent temperatures plunging across much of Europe early on Tuesday (Feb 27) as commuters braced themselves for another day of travel chaos.

Freezing temperatures have claimed at least 10 lives across the continent in the last three days with particularly acute fears for rough sleepers and the eldery during the bitterly cold snap.

An Arctic front, which Britain's tabloids have christened "The Beast from the East", has swept in from Russia, causing widespread travel disruption and school closures.

The frozen temperatures in Europe are in stark contrast to the Arctic itself which is experiencing an unusually warm period despite it being the depths of winter when the sun never even rises above the horizon.

Meteorologists have documented temperatures above freezing in some parts of the Arctic, causing astonishment among many scientists.

"The Arctic is having an off-the-charts heatwave this week," the European Geosciences Union wrote in a tweet.

Yet hundreds of miles further south, temperate Rome woke to its first snowfall in six years on Monday thanks to the Polar Vortex. 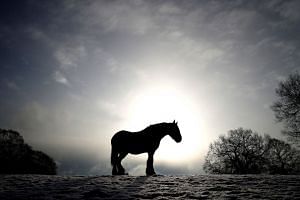 The mercury dipped as low as minus 4 deg C early Tuesday morning according to the Italian Meteorological Service.

A string of major football matches, including Italian Cup bouts on Wednesday between Juventus/Atalanta and AC Milan/Lazio, could be postponed if the cold weather continues, officials have warned.

One of the lowest temperatures in Europe was recorded at Dolina Campoluzzo, North Italy, which shivered at minus 40 deg C - although the weather station is located at an altitude of 1,768 metres.

SNOW IN THE MEDITERRANEAN

In Poland, where at least four people have died of exposure since Saturday, temperatures dropped overnight to minus 12 deg Celsius while parts of Lithuania, which has had three deaths, saw the mercury fall below minus 20.

Temperatures in France are forecast to drop to minus 10 deg C and feel as low as minus 18 deg C over the coming days.

Three cold-related deaths have been documented so far.

On Sunday, a 35-year-old homeless man was found dead in the south-eastern city of Valence, and two days earlier, a 62-year-old man died in his cabin in the woods outside Paris.

A third man, aged 53, was found dead in a frozen field in Gresy-sur-Aix on Monday afternoon.

Some local authorities in Europe have ordered officials to find shelters for the homeless.

In Belgium, a local mayor in a municipality of Brussels ordered homeless people to be forcibly detained if they refused to go to shelters.

Etterbeek mayor Vincent De Wolf said the cold was a "major risk", stressing that it was his responsibility to avoid potential deaths with temperatures set to drop to minus 15 deg C on Wednesday night.

In Berlin, local authorities said homeless shelters were already at 95 per cent capacity with temperatures dropping to minus 20 deg C in some parts of Germany.

Icy temperatures have caused travel disruption in the Netherlands and Britain.

Even the Mediterranean has seen flurries, with snow falling in Nice and drifts forcing authorities to close numerous motorways along Croatia's Adriatic coast.

"This week looks like being the coldest period we have had in the UK for a number of years," Britain's weather service, the Met Office, said on Sunday, warning of travel delays.

"Parts of England and Wales are likely to see their coldest spell of weather since at least 2013 - perhaps 1991," said the Met Office's chief forecaster Frank Saunders.