LONDON/BERLIN/CHAMPS SUR MARNE (NYTIMES) - Nightclubs around Europe are closed. But that doesn't mean the continent's party people are staying home.

As coronavirus lockdowns are eased, illegal raves are growing in popularity.

Outdoor events for hundreds, or in some cases thousands, organised via social media and messaging apps, are in full swing every weekend, causing headaches for police forces and lawmakers, and stirring public debate and news media panic.

Dr Tom Wingfield, a senior lecturer at the Liverpool School of Tropical Medicine, said in an e-mail that there were no medical studies about the coronavirus and outdoor parties, but that a likely lack of social distancing posed risks for transmission.

Throw in alcohol or drugs, and those risks could be exacerbated, he said.

Some countries have tried bringing nightclubs back.

After many partygoers gave false information, ID checks became mandatory in some areas.

Clubs in Barcelona, Spain, reopened at the end of June but shut again a few weeks later as the virus surged in the city.

In most countries, the idea of packed dance floors is too much to even consider right now.

Many nightclub operators fear they will be the last businesses allowed to reopen. 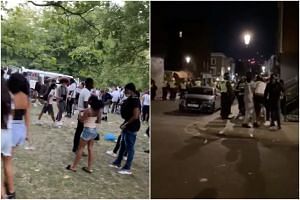 As coronavirus lockdown eases, illegal raves take off across Europe

Until then, thousands are partying in secret, despite the risk and the backlash.

The weekend before last, The New York Times reporters attended three events, in Berlin, in London and near Paris. Here's what they saw.

BERLIN: 'PARTYING IS A HUGE PART OF THE CITY'S IDENTITY'

It was midnight on Saturday, and a rave in a field on the north-eastern outskirts of Berlin was just getting started.

A DJ in shorts stood near turntables connected to a generator, playing a warm blend of house music and techno.

A tent selling beer had been set up nearby, and multicolored lights had been affixed to the trees.

The crowd of about 200 was getting bigger by the minute.

Despite the sign instructing partygoers to maintain a distance of at least 1.5m, the dance area was packed, and nobody was wearing a mask.

With the pandemic-mandated closure of Berlin's clubs stretching through the summer, illegal parties like this one have sprung up to fill the gap.

Most are free to attend, and take place in isolated locations to escape police scrutiny; many are advertised via Telegram, an encrypted messaging app.

To arrive at the party, attendees have to follow a map sent on the app and walk 15 minutes through an empty industrial area from the nearest train stop.

Although the number of new coronavirus infections remains relatively low in Germany, they have begun to climb in recent weeks, and parties like this have become a point of contention in a broader debate about whether young people are threatening the country's much-lauded success.

The parties' persistence has infuriated some public health officials and politicians, and complicated attempts by the leaders of the city's club scene to push for officially sanctioned events.

Some partygoers on Saturday argued that raves were a much-needed way to blow off steam after a period of isolation, and pointed out that outdoor events pose less risk.

Berlin's coronavirus regulations allow for gatherings in parks of up to 1,000 people, but only if social distancing measures are maintained and no alcohol is sold.

Standing between the beer tent and the packed dance area, Mr Paul Evina-Ze, 32, an American caricaturist living in Berlin, said: "Partying is a huge part of the city's identity, and you can't just expect people to wait two years."

He added that he was not concerned about the virus.

"I feel like if I were going to get it, it wouldn't affect me."

"Other people are looking to Berlin as an example," she said.

A public backlash against ravers in the city began in May, when demonstrators gathered in boats on the city's major canal in support of workers affected by club closures.

The protest turned into a flotilla of about 3,000 people and drifted in front of a hospital where Covid-19 patients were being treated.

Another wave of criticism came in late July, after police broke up a rave with approximately 3,000 attendees in Hasenheide, a city park.

The cover of a recent edition of Der Spiegel, the German news magazine, featured a picture of the Hasenheide party, with the headline "Are we too reckless?".

In an interview in the magazine, Mr Karl Lauterbach, a federal lawmaker with the centre-left Social Democratic Party, said people who attend the raves and ignore distancing rules "must be penalised with fines in the hundreds of euros".

In normal times, the forested shore of the Etang de la Haute Maison, a pond about 19km east of Paris, is a coveted spot for fishermen on the lookout for carp or pike.

But Saturday night, a different crowd gathered in the woods by the water: Around 400 young people, moving to techno music that boomed from loudspeakers as spotlights swept a dance floor.

The popularity of "free parties", as the illegal events are known here, has been surging in recent months.

"It's true, since the end of the lockdown, we've seen many more people attending the free parties," said Mr Julien Faux, 26, a regular attendee of the events since before the pandemic.

He was dancing behind the DJ on Saturday night, as a skull-and-crossbones flag, hung between two trees, flapped above his head. 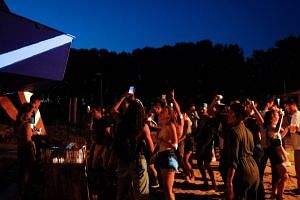 The event, called The Piracy, had all the trappings of a legal party: A dedicated Facebook page advertised a lineup of DJs, and tickets were sold online.

The difference was that the location was released only by e-mail less than an hour before The Piracy began.

It came with a warning to approach the site quietly and not to tell anyone else where it was.

"It's all about the smooth conduct of the party," the e-mail said.

It added that partygoers should bring masks and respect social-distancing measures.

That turned out to be wishful thinking.

"People need that freedom to party," said Ms Sarah Stalter, 21, a college student from Switzerland, in France on vacation.

Surrounding her were hundreds of unmasked people, some crammed onto the dance floor in a forest clearing while others sat to the side in groups, passing around bottles of alcohol and joints.

"I don't give a damn," Ms Stalter said as she wiggled to the sound of heavy techno beats. "Of course this virus scares me, but I've got to enjoy my 20s."

The proliferation of illegal parties poses a challenge for local authorities, who have wavered between strict repression and turning a blind eye.

"The police just let it go until they change their mind," said Mr Antoine Calvino, the co-founder of Socle, a union of French rave organisers.

"It's completely random, and we would like not to be in this gray area anymore."

Just after midnight the Friday before last, two young men stood on a street in the Tottenham district, surrounded by brick warehouses, looking lost.

"Are you going to the rave?" one man with a posh accent asked a passer-by.

He couldn't work out where it was, he added: The map he'd been sent via WhatsApp was confusing.

The details of the party they were looking for had been sent to a group on the messaging app a few hours before: To join, you had to submit a social media account so organisers could check you out. Advance tickets were sold via PayPal.

Messages in the WhatsApp group included appeals for discretion. "We are protecting our community," read one.

"It's like a military operation," one of the plummy-voiced men said, after finally deciphering the map.

"If people put half as much effort into solving coronavirus, we'd all be out of it by now."

Soon, after walking through an underpass, the thud-thud-thud of a kick drum came into earshot and the two men walked up a path toward the sound.

After a quick bag search by security guards, they moved into a woodland clearing, where about 300 people were dancing to house music, the trees around them illuminated by green and purple lights.

The Guardian, the news outlet, has declared that Britain is now in the midst of a "shocking return of rave".

About 30 years ago, young people here created a moral panic when they began holding parties in secret locations, fuelled by Ecstasy and acid house, a new type of dance music at the time.

Today, the moral panic is less about drugs and more about the coronavirus, with fears that illegal parties could promote a second wave.

In June, 6,000 people attended a party near Manchester, in northern England, where a woman was raped and several people were stabbed.

Parties have been taking place around Britain every weekend since, with fewer reports of violence.

But criticism from newspapers and politicians has been harsh.

Some party organisers have tried to respond to public concern. "Covid-19 measure been taken," said a message in the WhatsApp group about Friday's event.

"A station at the entry will be at your disposition with facial mask and hydro alcoholic gel," it added.

These were not in evidence on arrival, and only a dozen or so attendees wore masks.

For most, the coronavirus seemed far from their minds.

Dancers were packed tightly in front of a DJ.

In the middle of the improvised dance floor, a tall man stood with his eyes closed, moving his arms like a bird's wings, transported by the music.

People chatted to each other for a moment, then hugged, instant friends.

Occasionally a balloon drifted above the dance floor, filled with nitrous oxide, the party's drug of choice.

One attendee, a 25-year-old architect who asked not to be named in case he was thrown out of the WhatsApp group, said he'd been going to illegal raves for a couple of years.

"Last year, it was smaller," he said.

"Everybody just wants to get out now, I suppose."

Pubs and restaurants in Britain had reopened, he added, but no one in authority was thinking about dance-music culture.

He would have thought twice about going to an indoor or boat party, he said, but outdoor ones seemed fine.

Some Lisbon nightlife back under curfew after illegal partying

As the night went on, more people arrived, even a man on crutches.

Someone climbed a tree at one point, and the music stopped while a security guard ordered him down.

That was the closest the event came to an incident until, around 4am, three police officers turned up, shining flashlights across the crowd.

They left as quickly as they arrived, but their presence was enough to send some home.

About 20 minutes later, the police returned - 20 officers this time - and stood in the path to the clearing.

One officer said they'd agreed with the DJ that he could keep playing until 4.30am.

They wouldn't make any arrests unless the DJ refused to stop, the officer added.

The sun was rising when the clock struck 4.30, and the music did indeed stop, before restarting for a final tune, an encore of sorts. Then everyone quickly dispersed.

The next evening, the party's organisers sent a new map to the WhatsApp group, with details of another party that night, and a plea: "PLEASE DO NOT SHARE."