LONDON (BLOOMBERG) - A hard Brexit could bring queues at airports and put a brake on new routes, but airline passengers should at least be able to chow down on an in-flight meal.

With concerns growing that a no-deal split will snarl up traffic at British ports, stalling the flow of goods, the world's biggest caterer to the aviation industry has begun to stockpile entrees, snacks and even plastic cutlery.

Gate Gourmet, which serves 20 airlines at 10 British airports, is accumulating enough pizza, ice cream and roast duck (for business class) to see passengers through about 10 days of disruption.

Chilled items are being held at a warehouse in Peterborough, England, while mountains of snack boxes, peanuts and toilet rolls are piling up at a room-temperature facility in London.

"Companies could be in difficulty if they haven't prepared themselves and ensured a continuity of supply," Mr Stephen Corr, the Zurich-based firm's managing director for Western Europe, said in an interview.

"We've been gradually increasing inventory levels of products from the European Union to ensure that any initial disruption at the UK border can be covered." 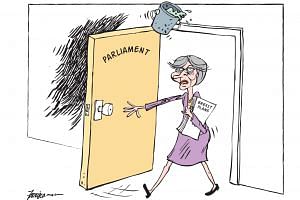 Theresa May to unveil Brexit 'Plan B': Four main scenarios

Gate Gourmet, part of the former Swissair catering arm Gategroup Holding AG that is now controlled by China's HNA Group Co, produces most of its meals in Germany and Spain, with airlines in Britain supplied by truck.

That means using the Calais-Dover sea crossing, which is expected to become a pinch-point following the introduction of time-consuming customs checks if Britain exits the EU without a deal.

Before being sent to the airport for reheating aboard the plane, the cooked food is stored in Peterborough.

The site, run by Chiltern Cold Storage, is now 98 per cent full, with everything from frozen meat for restaurants to vegan meals and dog food as suppliers the length and breadth of Britain call on its services, according to operations director Tom Lewis.

More and more companies are triggering contingency plans, with the Brexit deadline less than 75 days away and Prime Minister Theresa May last week failing to get a deal brokered with the EU past Parliament.