BERLIN (REUTERS, AFP) -  Chancellor Angela Merkel on Monday (Feb 26) overwhelmingly won the blessing of her conservative party for a hard-fought coalition deal, a relief for the leader who has been weakened by party infighting.

It also brings her a step closer to a fourth term at the helm of Europe’s biggest economy.

At a congress of Merkel’s Christian Democratic Union (CDU), the party she has led for nearly 18 years, delegates voted in favour of a government pact hammered out with the centre-left Social Democrats (SPD).

The strong approval from the CDU gives a boost to the chancellor, who suffered a major setback when the party recorded its worst score since the 1950s in September’s general election.

The congress was also about the party’s future, with Merkel moving to quell a right-wing rebellion as she vowed to “set the party on course towards... renewal”.

In a clear sign that attention had turned to the question of succession, the biggest applause of the day was also reserved for the conservatives’ newly appointed general secretary, Annegret Kramp-Karrenbauer.

Dubbed AKK or “mini-Merkel” by German media, the premier of Germany’s tiny Saarland state was tapped by Merkel last week to take over as CDU general secretary, fuelling speculation the veteran chancellor is lining up her successor. 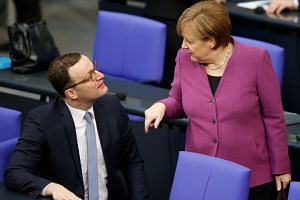 Weakened Merkel to give outspoken critic a Cabinet job: Source

A staunch Catholic who despite her centrist stance has also advocated a tougher line on migration, Kramp-Karrenbauer was seen as a wise choice to soothe internal discontent. The 55-year-old shares some but not all of Merkel’s views.  Her Catholic, western German background contrasts with Merkel’s Protestant, eastern roots.

While socially conservative and known for opposing gay marriage, Kramp-Karrenbauer is a strong supporter of the minimum wage and workers’ rights.

The last major hurdle to end a five-month political impasse after a Sept 24 election, however, comes next week. On March 4, the results of a postal vote by SPD members vote will be announced, and that result is far less certain.

The CDU conference in Berlin follows Merkel’s announcement of her picks for a new, younger Cabinet intended to rejuvenate the party and end disagreements over how to tackle the rise of the far-right Alternative for Germany (AfD). ​

The CDU’s youth wing has called for the party to renew itself in the wake of its worst election result since 1949 in September and
Merkel, 63, stressed in her speech to delegates at Monday’s CDU meeting that younger faces were in the new team.

She asked her party to vote in favour of the deal, which is expected to go through easily, as a poll showed support for both her conservative bloc – which also includes the Bavarian Christian Social Union (CSU) – and the SPD rising.

“We want to make our contribution to forming a stable federal government that is capable of acting,” Merkel said, adding that most people in Germany and beyond expected this.

“The fact we’re voting on a coalition treaty today five months after the election shows that we’re dealing with a difficult situation that we’ve never faced before.”

She reassured delegates that the new German government would not take out any new debt, avoid tax increases, seek to renew the European Union, ensure fast internet is available everywhere in Germany by 2025, boost research spending, create 8,000 nursing jobs and take a “zero tolerance” policy on security.

Merkel said conservatives secured wins in coalition talks with the SPD, including preventing what she called the “aberration” of a single health system that the SPD had demanded to replace the current dual public-private system.

Merkel disappointed many conservatives by agreeing to give the SPD the powerful finance ministry in a new government. She said it was a “painful” loss but added that it was right not to let negotiations fail due to portfolios rather than substance.

She also underscored the importance of the economy ministry - which the CDU will retake after years in SPD hands.

After 12 years as chancellor and almost 18 years in charge of her party, Merkel’s authority is waning and on Sunday, she responded to growing calls for new blood at the top of the CDU.

Merkel’s efforts to forge a coalition with two other smaller parties collapsed in November. That forced her to woo the SPD, which had been a coalition partner in her 2013-2017 government but was reluctant to repeat the experience after seeing its own support fall to its lowest since World War Two.

If SPD members vote “no” in their ballot, the most likely outcome is a new election or possibly a minority government.  Experts say a snap election could result in further gains for the anti-immigration AfD, which entered parliament for the first time in September.

Some analysts say the prospect of a new election will spur SPD members into voting “yes”, to prevent a further deterioration in support for the Social Democrats.  A Forsa poll on Monday showed the SPD up two points from a week ago, at 18 per cent, while Merkel’s conservatives edged up one point to 35 per cent. The AfD remained the third-strongest party with 13 per cent.