BERLIN (REUTERS) - Chancellor Angela Merkel said on Friday (Sept 21) the leaders of her coalition parties would try to find a solution this weekend to a row over Germany's scandal-tainted spymaster, seeking to defuse a problem that has plunged the government into crisis.

Spy chief Hans-Georg Maassen had faced accusations of harbouring far-right views after he questioned the authenticity of video footage showing radicals hounding migrants in the eastern city of Chemnitz.

A deal was struck on Tuesday to move him into a better paid job at the interior ministry. But that unpopular compromise came unstuck earlier on Friday when the leader of Merkel's junior coalition partner, the Social Democrats, said it was a mistake.

Merkel said she had agreed with Social Democrat leader Andrea Nahles (SPD), and with Horst Seehofer - leader of the Bavarian Christian Social Union (CSU) - to review the deal, which pushed their six-month-old coalition close to collapse.

"We have agreed to reappraise the situation. I regard that as right and necessary," Merkel told reporters, adding: "Given the many foreign and domestic challenges, we need full concentration on government action."

"We want to reach a joint, sustainable solution and to do so over the weekend," she added in a short statement.

The SPD had wanted Maassen removed. But Seehofer stood behind him. 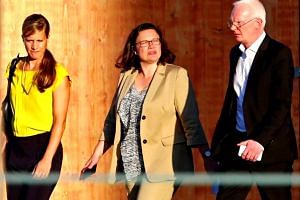 Nahles earlier said the "overwhelmingly negative reactions from citizens" to the compromise showed it was a mistake. A poll for the Funke media group earlier shown 72 per cent of voters had less confidence in the government after the deal.

In a letter to Merkel and Seehofer, the SPD leader added that her party wanted to continue working in the coalition but that there needed to be trust in the alliance.

The row over Maassen has exposed painful faultlines in German politics and wider society, where any espousal of far-right views has been anathema since the Nazi era.

Those inhibitions are less marked in the country's eastern regions, which were subject to political extremism as a satellite of the USSR until unification in 1990.

A poll published earlier on Friday taken partly before and partly after Maassen's comments showed that support for Merkel's conservative bloc has slumped to a new low, and the far-right Alternative for Germany (AfD) would be the second-biggest party if an election were held right away.

The ARD DeutschlandTrend survey put support for Merkel's conservative alliance - her Christian Democratic Union (CDU) and their Bavarian sister party, the CSU - at 28 per cent, down one point from Sept 6 and at a record low.

The anti-immigration AfD gained two points to a record high of 18 percent, with the SPD slipping to 17 per cent.

The Maassen scandal comes only two months after Merkel closed a painful row with her Bavarian CSU allies on immigration - an issue that goes back to her 2015 decision to open Germany's borders to refugees fleeing war in the Middle East.

The grand coalition only took office in March, nearly six months after last year's election, as there was effectively no other viable governing option following the collapse of talks between Merkel's conservatives and two smaller parties.