Mr Ostermeier, one of Europe's hottest theatre directors, said the Chinese tour of Ibsen's An Enemy Of The People - in which a local doctor fights political corruption - was abruptly cut short by the authorities "because of technical problems".

His acclaimed version of the 19th century classic by the Norwegian playwright, which played at the Opera House of the National Centre for the Performing Arts near Tiananmen Square, includes a scene where the actors and audience interact.

"When the authorities realised (after the first of three planned performances in the Chinese capital) that it included an interaction, they did everything they could so there would be no scandal," Mr Ostermeier told AFP.

"But the news had spread like wildfire on social media," the director of Berlin's famed Schaubuhne Theatre added.

The authorities moved quickly to censor all mention of the scene, "erasing everything that had been said on social media", said Mr Ostermeier, who is in Paris to premiere his new staging of Shakespeare's Twelfth Night at the Comedie Francaise.

State control of the Internet has been drastically increased in China under President Xi Jinping, with the Web regularly purged of criticism of the authorities or content judged politically sensitive. 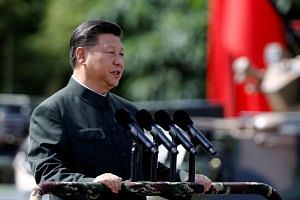 Mr Ostermeier said he was told to cut the scene, but instead replaced it with an announcement saying that "we would have liked to have a discussion with you, but the actor who was to do it has lost his voice. Has that ever happened to you?"

"Then the whole troupe came on stage and there was two minutes of silence. The audience understood immediately," Mr Ostermeier said of the performance earlier this month.

"Some started shouting out their support of free speech and individual liberty," he added.

The German, who has toured China with his company many times before, said he had been told by fellow directors that it "wouldn't be possible" to stage An Enemy Of The People in the country.

The play tells the story of a provincial doctor who discovers that the waters of a spa are contaminated. But when he reveals the scandal, he is forced out of his home after being accused of trying to ruin the village.

Mr Ostermeier said he thought that by inviting him to stage the play in China, the authorities wanted to show their openness.

It was only later that "we realised that they had not seen the play in advance, and that from their point of view, there had been an error", he said.

Further performances in Nanjing were cancelled "because of technical problems".

The left-wing director has shown his adaptation in some 40 countries after it was the hit of the Avignon festival in France in 2012.

Since then, he has filmed the scene where the public are invited to speak in every city that it plays for a documentary he is making called Mapping Democracy.

The Beijing show was also filmed, although the recording was later confiscated by officials.

However, Mr Ostermeier revealed that he still has a copy.

"It's delicate," he told AFP. "They wanted to watch it to see who had spoken out."