What should you do if you get caught in a situation like the terror attack in Jakarta on Thursday (Jan 14)? Here are some tips from security experts who spoke to the BBC when Paris came under attack on Nov 13, 2015.

1. BE PREPARED: Many survivors of the Paris attacks said they mistook the first gunshots for fireworks. This is typical, says Mr John Leach, a survival psychologist and military survival instructor.

People who are not expecting gunshots will assume they are something else because it does not fit in with their expectations. The time it can take to understand what is happening can be lethal.

Ask yourself what your first response should be if anything goes wrong. And pay attention to where the exits are - this may help save lives. 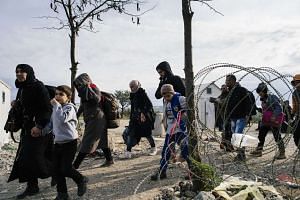 2. REACT QUICKLY: Most people will be too confused to do anything during an attack. Mr Leach has looked at life-threatening situations around the world and found that only 15 per cent of people will respond in a way that helps them survive.

Up to 75 per cent will just be too bewildered by what is happening around them to react at all. The other 10 per cent will react in ways that reduce their chances of survival and get in the way of other people, he says. Acting decisively might make survival more likely.

The first thing is to try to get out of the way and make yourself a smaller target. This can involve simply dropping to the ground but ideally means getting behind some sort of cover. Hard cover such as a concrete wall is the best option.

In some scenarios, playing dead or running away may save your life.

4. FIGHTING BACK: Taking on a gunman has worked in some situations. In August, a train attack was foiled in France after passengers overpowered the lone gunman. But of the four passengers involved in subduing him, one was in the air force and another in the National Guard. The men made the attempt only after the shooter's weapon jammed.

Mr Reed says it is not a good idea to take on an assailant without training. Many attackers will be working in teams, while some will be wearing body armour and others could be carrying explosives.

Despite the dangers, some argue that it is important to be ready to fight if necessary. Psychologist and hostage negotiator James Alvarez said: "If I know that I'm going to be shot, I'd like to think that I'm not going to go down quietly."

5. AFTER THE ESCAPE: Once someone has managed to escape the situation, it is important for him to remain vigilant. "Get as far away as possible, behind as much hard cover as possible and go to the nearest authority figures for help," says Mr Reed. It can be dangerous to join big groups nearby and to take public transport.

"Always assume that there's going to be a secondary device or action," adds Mr Reed. The key is to take advice from police officers or other officials as they may have better knowledge of the situation.

6. HELP ONE ANOTHER: The chances of being caught up in a major attack are still low. But if it does happen, cooperating with others can increase people's chance of survival, says Mr Chris Cocking, a social psychologist and expert in crowd behaviour.

A version of this article appeared in the print edition of The Straits Times on January 15, 2016, with the headline 'What to do in a terror attack: Advice from experts'. Subscribe
Topics:
More
Whatsapp Linkedin FB Messenger Telegram Reddit WeChat Pinterest Print Purchase Article Copy permalink