BRUSSELS (BLOOMBERG) - Five new policy measures could preserve much of the European Union's heavy industry while prodding those companies towards reducing their fossil fuel emissions.

That is the conclusion of research from a group of academics who are advising companies and governments about how best to clamp down on the pollution that causes global warming.

Their findings outlined in a paper published on Wednesday (Oct 30) feeds the debate about how the EU can achieve its goal of reducing net greenhouse gas emissions to zero without driving industry and jobs abroad. Heavy industry, including producers of aluminum, cement and steel, accounts for around 16 per cent of European and 25 per cent of global greenhouse gas emissions.

"Industry and investors require and demand an integrated, coherent and comprehensive policy framework to support the creation of markets for climate-friendly materials and discourage greenhouse gas-intensive materials," researchers in the Climate Friendly Materials Platform said in the report.

Currently, the EU's existing climate and energy measures are not joined up enough to move businesses in sync with the EU goal, the group said. The European Commission's incoming President, Ursula von der Leyen, wants the region to be a step ahead of other major emitters such as the US, China and India.

One solution proposed by von der Leyen is a carbon border tax, which would levy a fee on the carbon content of materials imported into the EU. That would prevent a phenomenon known as "carbon leakage", where environmental rules drive polluting industry abroad, leaving emissions rising in places where rules are more lax.

The Climate Friendly Materials Platform brings together leading think-tanks and university research groups to analyse ways and means to reach climate neutrality. It's one of the groups EU policymakers consider when drafting regulations.

A "climate contribution" is the first alternative to a carbon border tax. It would act as a charge on consumption in addition to fees paid for pollution under the EU Emissions Trading System, a cap-and-trade market limiting carbon pollution from about 12,000 installations owned by utilities and manufacturers. The contribution would be calculated based on the carbon cost of the production of the material. It would apply to domestic and imported materials sold for final use in Europe. 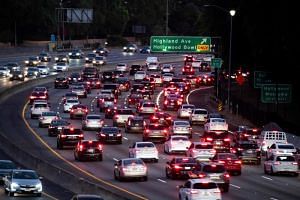 The researchers said a climate contribution would work better than a carbon border tax for a number of reasons. It is uncontroversial from a trade-law perspective, does not require reimbursements for exports and can be initially implemented at the national level to allow for early exploration.

Carbon prices, even thought they jumped fivefold in the past three years, still are not enough to clamp down on emissions from most industries. They need to be complemented by policies that lead markets toward greener alternatives and hedge against regulatory risk.

A solution may be Carbon Contracts for Difference, or CCfDs. Those would be signed between national governments and low-carbon projects, paying out the difference between the yearly average EU carbon price and an agreed strike price-per-tonne of emission reductions. That would effectively ensure a guaranteed carbon price for the project. In turn, projects are obliged to pay back the difference if CO2 prices exceed the strike price.

CONTRACTS FOR DIFFERENCE FOR RENEWABLES

A contract for difference with renewables would give investors in renewables insulation against the risk that government energy regulations change. That would underpin the economics of wind and solar projects and help compensate clean power plant operators for what they produce. It would pay the difference to an agreed strike price whenever wholesale electricity is lower than the strike price. Operators must pay back the difference when market values lie above the strike price.

"Governments at all levels can address emissions embodied in infrastructure, buildings and carbon systems that they procure and therefore respond to local initiatives as well as national and European targets," according to the Climate Friendly Materials Platform's report.

In the longer term, regulators may opt for a "sunset clause" for high-carbon production processes and products and write into law a requirement for low carbon usage in making products of all kinds.

"This will however require that sufficient clean production capacity is available, probably not before the mid-2030s, and would therefore need to be combined with support measures for the phase-in of innovative low-carbon technologies," the researchers said.