He could be in office till 2032; Parliament's powers reduced

ISTANBUL • Turkish President Recep Tayyip Erdogan has won sweeping new executive powers after his victory in landmark elections that also saw his Islamist-rooted party and its nationalist allies secure a majority in Parliament.

Mr Erdogan's main rival, Mr Muharrem Ince of the Republican People's Party (CHP), conceded defeat but branded the elections "unjust" and said yesterday the presidential system that now takes effect was "very dangerous" because it would lead to one-man rule.

The most popular - yet divisive - leader in Turkey's modern history, Mr Erdogan, 64, told jubilant supporters there would be no retreat from his drive to transform the country, a deeply polarised nation that is both a Nato member and, at least nominally, a candidate to join the European Union.

He is loved by millions of devoutly Muslim working-class Turks for delivering years of stellar economic growth and overseeing the construction of roads, bridges, airports, hospitals and schools.

But his critics, including human rights groups, accuse him of destroying the independence of the courts and media freedoms. A crackdown launched after a failed 2016 coup has seen thousands detained.

Mr Erdogan and his Justice and Development Party (AKP) claimed victory in Sunday's presidential and parliamentary elections after defeating a revitalised opposition that had gained considerable momentum recently and looked capable of staging an upset.

"It is out of the question for us to turn back from where we've brought our country in terms of democracy and the economy," Mr Erdogan said on Sunday night.

With virtually all votes counted, Mr Erdogan took 53 per cent against Mr Ince's 31 per cent, while in the parliamentary vote the AKP took 42.5 per cent and its MHP nationalist allies secured 11 per cent, outstripping expectations.

Voter turnout was high, at nearly 87 per cent.

The victory grants Mr Erdogan vastly expanded authority over the legislature and the judiciary.

The election was the first since voters narrowly approved a referendum last year to give the president - once a largely ceremonial role - sweeping executive powers.

Under the new system, Mr Erdogan can run for a second term as president - and a third, if he were to call an early election - opening the possibility that he could stay in office until 2032.

The office of prime minister, which Mr Erdogan held from 2003 to 2014, will be abolished. The Cabinet will be composed of presidential appointees rather than elected lawmakers. And Parliament's powers are reduced, including oversight of the Budget. 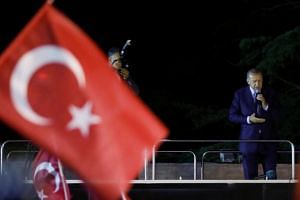 "The new regime that takes effect from today is a major danger for Turkey... We have now fully adopted a regime of one-man rule," Mr Ince told a news conference.

His secularist CHP won 23 per cent of seats in the new Parliament and the pro-Kurdish HDP nearly 12 per cent, above the 10 per cent level needed to enter Parliament.

The state-run Anadolu news agency said that, based on unofficial results, AKP and its MHP ally would hold 343 seats in the 600-seat Parliament - 293 of those for the AKP.

CHP will have 146 seats, HDP will have 67 and the breakaway nationalist Iyi Party 44.

Mr Erdogan's win also has potentially grave consequences for cooperation within Nato and security in Iraq and Syria where Turkish forces are battling Kurdish militants.

Turkey is an important Nato member because of its strategic location bordering Iraq and Syria as well as proximity to Russia. It has played a key role in the fight against the Islamic State in Iraq and Syria (ISIS).

But there have been tensions with other Nato members, notably over Mr Erdogan's rapprochement with Moscow, and with the US over the role of Kurdish fighters in the battle against ISIS.