KATOWICE (Poland) • Fighting climate change is one of the best ways to improve health around the world, and the benefits of fewer deaths and hospitalisations would far outweigh the costs of not acting, the World Health Organisation said.

Keeping global warming "well below" 2 deg C, as governments have pledged to do under the 2015 Paris Agreement, could save about a million lives a year by 2050 through reducing air pollution alone, the UN agency said.

Burning of fossil fuels - which emit carbon dioxide, the main culprit for climate change - is a major driver of air pollution, the WHO said in a report issued at UN climate talks in Poland on Wednesday.

Dr Maria Neira, WHO's director for public health, said exposure to air pollution causes 7 million deaths worldwide yearly. "This is one of the most outrageous things happening today," she said. "We want to tell countries: The more you delay this (clean energy) transition, the more you will be responsible for the... millions of deaths recorded every year."

Health gains resulting from action to curb climate change, such as adopting renewable energy, would add up to about twice the cost of rolling out those policies globally, and even more in China and India, said the WHO, citing a recent study.

WHO scientist and report author Diarmid Campbell-Lendrum said health had often been disconnected from discussions on climate change, but there was now an urgent need to break down the barriers and talk about the benefits for society.

In the 15 countries that emit the most greenhouse gases, the cost of air pollution for public health is estimated at more than 4 per cent of gross domestic product (GDP), the WHO report said.

In comparison, keeping warming to the Paris deal temperature limits would require investing about 1 per cent of global GDP.

Dr Kristie Ebi, professor of global health at the University of Washington, said the world now had scientific evidence that "people today are suffering and dying from climate change".

The consequences range from chronic diseases linked to air pollution to undernutrition as crop yields fall and rising carbon dioxide levels in the air slash nutrients in staple foods, she added. 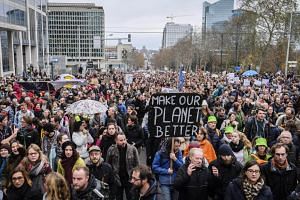 How to sell climate change and save the planet

Mr Inia Seruiratu, Fiji's Minister of Agriculture and Disaster Management, said his Pacific Island nation was already seeing the effects of climate change on health, such as a rise in water-borne diseases after storms and floods.

It is working to build solar-powered health clinics that can also withstand strong winds and other extreme weather, he noted.

Despite such efforts, the WHO report said financial support, particularly for small island nations and the poorest countries, remains "woefully inadequate".

Only about 0.5 per cent of funds provided by international institutions for measures to adapt to climate change had been allocated to health projects. Money is also lacking for scientific research into the different options for tackling the problem, Dr Ebi said.

If countries do not ramp up efforts to protect their people's health on a warming planet, the battle is likely to end up in the courts, warned Dr Neira. In Switzerland, for example, a lawsuit has been filed on behalf of about 1,000 elderly women who are challenging the government's emissions reduction policy on the grounds that they are vulnerable to heatwaves exacerbated by climate change.

SEE OPINION: How to sell climate change and save the planet