DAVOS • Climate change topped the discussion at the closing session of the World Economic Forum (WEF) annual meeting in the Swiss Alps, just as it had dominated the rest of the four-day event.

"Climate change is happening faster than we thought it would," World Bank chief executive officer Kristalina Georgieva told the world's political and business elite yesterday, the WEF said in a media statement.

She called on governments and businesses to eliminate harmful subsidies for energy and agriculture, invest in shifting to a low-carbon economy, support those countries most at risk of the consequences of climate change, and relentlessly pursue a price for carbon.

Surface temperatures have already risen by nearly 1 deg C and they are not stopping, with the five warmest years on record occurring since 2010.

A rise of 3 deg C will wipe out 25 per cent of global gross domestic product, while the cost in human suffering will be immeasurable, according to the World Bank.

The warning from the World Bank came a day after United Nations Secretary-General Antonio Guterres told the business and political leaders gathered at the Swiss town of Davos that climate change is "the most important global systemic threat in relation to the global economy".

He said: "Climate change is running faster than we are. I believe we are losing the race." 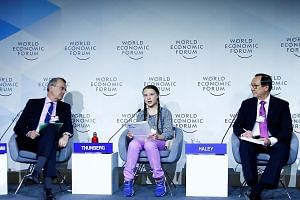 Teenager takes on Davos elite over inaction on climate change

Aside from the global crisis, inequality and youth unemployment also featured in the final discussion yesterday.

Mr Lesetja Kganyago, governor of the South African Reserve Bank, said governments and unions need to work together to make the transitions in labour that are needed.

"You cannot protect jobs," said Mr Kganyago, "you must think how we protect people."

The top 1 per cent in the Group of 20 countries earn 10 per cent of total income, while half the world has nearly no access to healthcare.

Ms Georgieva called on leaders to focus more attention on those who are losing out and left behind.

"Put decisions into the hands of mums and grandmothers and you will see great things happen" she said, to applause from the hall.