Beijing says it will always strive for peace, does not intend to challenge or replace US

BEIJING • China will never pursue hegemony or expansion, nor will it seek to create spheres of influence, no matter how international situations change and how China develops itself, the government said in a policy paper released yesterday ahead of the 70th anniversary of the founding of the People's Republic of China on Oct 1.

It has always been China's unswerving national will to strive for a peaceful international environment favourable to its own development, and to better safeguard world peace and promote common development, according to the White Paper titled China And The World In The New Era.

Noting that peace, development, cooperation and mutual benefits are the trends of the times, the White Paper said China's path of peaceful development is in line with the trend of history and the general trend of the world.

China naturally develops and becomes stronger, but does not want to threaten, challenge or replace any other country in the process, nor will it seek hegemony, according to the White Paper.

"From the mid-19th century, China was abused by the Western powers and left with indelible memories of the suffering brought about by war and instability. It will never impose the suffering it has endured on other nations," it said.

In recent years, China has proposed a raft of significant international concepts and initiatives, including a global community of shared future, a new model of international relations, and the Belt and Road Initiative.

Since its reform and opening up in 1978, China has cut its armed forces by more than four million, figures from the White Paper show.

Over the six decades since China began to provide foreign assistance in the early 1950s, it has provided 166 countries and international organisations with nearly 400 billion yuan (S$78 billion) in aid, and dispatched more than 600,000 aid workers.

The White Paper also said that China will never "trade away" its core interests and will not allow its security and sovereignty to be compromised.

"The threat of trade wars and the continued increase in tariffs are not conducive to solving problems," it said, in reference to its trade disputes with Washington. 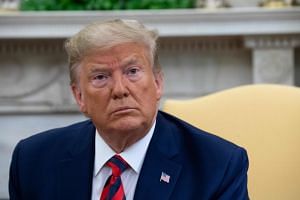 The United States should look rationally at China's development, as China has no intention of challenging the US and does not want to replace the US, it added.

"The United States cannot control China, and it is even more unlikely to stop China's development. Curbing and suppressing other countries and transferring domestic contradictions abroad will not keep the United States strong."

China needs the strong, unified leadership of the Communist Party or the country will "crumble", the White Paper said, adding that the country's success since the Communists took power 70 years ago was down to the party's leadership.

"China is huge in size, has complex national conditions, and its governance difficulties are rarely seen. Without a unified and strong leadership, China will move towards division and crumble, bringing disaster to the world," it said.

The Chinese authorities have long justified a firm fist in dealing with problems as being necessary for national stability.

Chinese President Xi Jinping has further tightened party rule and cracked down on those who may challenge the authority since taking office in late 2012. He has also overseen a military modernisation programme that has unnerved the region.