Despite having just posted its worst economic growth figure in nearly three decades, China has not reached the end of its miraculous expansion, but will continue to grow at a sustainable rate.

Calling it an "indisputable fact", Chinese Vice-President Wang Qishan said yesterday that the world would benefit from China's continued economic progress, given how closely tied it is to the global economy.

Just last week, the world's second-largest economy reported 6.6 per cent growth for last year - its slowest in 28 years and a result of weaker domestic demand and punishing US tariffs.

Beijing has promised greater support for its economy this year, including bigger tax cuts for businesses and spending on infrastructural projects.

"Speed does matter. But what really matters is the quality and efficiency of our economic development," said Mr Wang, widely regarded as President Xi Jinping's right-hand man and a key figure in shaping China's foreign policy.

In his special address at the World Economic Forum in Davos, Switzerland, the 70-year-old also urged countries to press on with structural reforms to deal with widening income inequality and global developmental imbalances.

In a pointed reference to the United States ahead of crucial trade talks next week between the two countries, he said there was a need to accommodate the interests of all countries, especially those of emerging markets and developing nations. 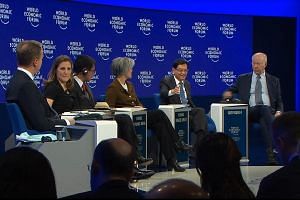 "We need to respect independent choices of the model of technology management and of public policies made by countries and their right to participate in the global technological governance system as equals."

One of the key sticking points of the trade negotiations has been over the US' accusations of China's forced technology transfers and intellectual property theft.

Describing himself as an optimist, Mr Wang, who has held a number of financial posts and was responsible for driving Mr Xi's anti-corruption campaign, called for greater cooperation among developed and developing countries.

"What we need to do is make the pie bigger while looking for ways to share it in a more equitable way. The last thing we should do is to stop making the pie and just engage in a futile debate on how to divide it," he said. "Shifting blame for one's own prob-lems onto others will not resolve the problems."

His speech bore similarities to a keynote address he made in Singapore in November, where he denounced unilateralism and urged the US to work with China to resolve their trade dispute.

He was also asked by host Klaus Schwab, founder and executive chairman of the World Economic Forum, about how US-Sino ties could be improved.

Perhaps not wanting to give too much away ahead of the trade negotiations, the usually forthcoming Chinese Vice-President would only reiterate that the two economies are "intertwined and mutually indispensable", and confrontation would harm both their interests.