A US warship sailed through disputed waters near a Chinese- claimed island in the South China Sea yesterday, turning months of verbal sparring over Beijing's land reclamation in the region into a direct military challenge.

The move drew a swift rebuke from China, raising tensions between the two powers ahead of meetings at a pair of regional summits in the coming months.

China's Foreign Ministry expressed "strong dissatisfaction" with the US action, and its Defence Ministry called the US "irresponsible" and said it would take all necessary measures to safeguard national security. 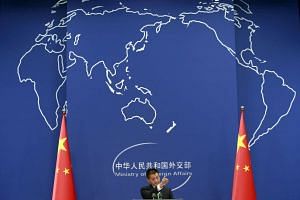 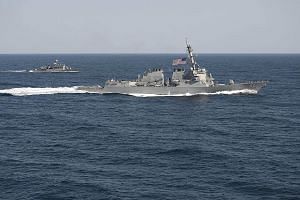 Nothing provocative in what the US is doing, says Aquino

At around 6.40am yesterday, the USS Lassen guided-missile destroyer began a run that took it within 12 nautical miles of the Subi reef - crossing into what would be Chinese territory if the United States recognised the man-made island.

The mission was intended to make the point that Chinese land reclamation in the South China Sea should not affect freedom of navigation.

In 2013, Washington flew two bombers over the disputed Senkaku/Diaoyu Islands in the East China Sea in direct violation of a new air defence identification zone established by Beijing.

It was unclear if Washington had spoken to Beijing before yesterday's mission, though US State Department spokesman John Kirby stressed that nations do not need to consult each other when sailing through international waters. The Chinese authorities followed, monitored and warned the US vessel following what it described as "illegal entry" into the waters, Foreign Ministry spokesman Lu Kang said in a statement posted on the ministry website.

"China expresses its strong dissatisfaction and resolute opposition," Mr Lu said, stressing that China's construction works do not affect freedom of navigation or flight in the South China Sea .

Chinese Foreign Minister Wang Yi earlier warned the US to "think carefully before acting, not to take reckless action and not to make trouble out of nothing".

The Chinese government summoned the US Ambassador to China, Mr Max Baucus, over the matter.

Philippine President Benigno Aquino, whose country also has claims in the region, said he saw no issue with the US operation.

The voyage was lauded by Washington pundits who had pushed for such an operation since the beginning of the year when US concerns started to grow about the pace of Chinese land reclamation in the disputed waters.