The Global Wage Report 2018/19 released last month finds that in real terms (adjusted for price inflation), global wage growth last year was not only lower than in 2016, but also fell to its lowest growth rate since 2008, remaining far below the levels obtained before the global financial crisis.

If China, whose large population and rapid wage growth significantly influence the global average, is excluded, global wage growth in real terms fell from 1.8 per cent in 2016 to 1.1 per cent last year, said the ILO report.

The report says: "While wages have increased rapidly over the past decade in some countries, most particularly in China, in many other countries, average wages remain low and insufficient to adequately cover the needs of workers and their families."

The ILO report was based on data from 136 countries. 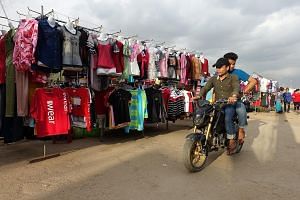 Minimum wage in vogue across Asia as debate rages on

China's war on poverty could hurt the poor most

Mr Xu Ding, an ILO economist for wage and labour relations and one of the report's authors, said changes in China's mode of economic development constitute another factor.

"The economy in China has been growing steadily over the last decade despite the fact that the main drivers of growth have been shifting to different sectors," he said. "All of them have translated into high levels of employment and an increase in real wages."

According to the National Bureau of Statistics, 33 per cent of China's employees worked in tertiary industries in 2008, compared with 45 per cent - or more than 349 million people - last year.

During the period, China's average wage increased by 8.2 per cent annually in the decade, much higher than the global growth rate, according to the ILO report.

Following the same pattern, average real wages nearly doubled in China between 2008 and last year, even as other G-20 countries, including Japan, Britain and Italy, saw a slower rise and fluctuations.

Mr Xu said China's wages likely remained on an upward trend because the country has adapted well to changing international and domestic markets, adding that rapid urbanisation was another catalyst for wage growth.