WikiLeaks founder Julian Assange was arrested by British police on Thursday (April 11) at the Ecuador embassy in London, where he lived in asylum for seven years.

This development left some Internet users questioning the fate of the much-loved Embassy Cat which Assange adopted in 2016.

Was there going to be a feline extradition too, some wondered.

After all, Embassy Cat, who also goes by the names James and Cat-stro, after the Cuban leader Fidel Castro, is an Internet sensation in its own right.

Though multiple sources have since indicated that the cat had left its home long ago, and was presumably given to a shelter, its exact whereabouts remain unknown.

We can confirm that Assange's cat is safe. Assange asked his lawyers to rescue him from embassy threats in mid-October. They will be reunited in freedom. #FreeAssange #NoExtradition pic.twitter.com/zSo8RfXXc9

Here are other some other well-known personalities and their famous pets. 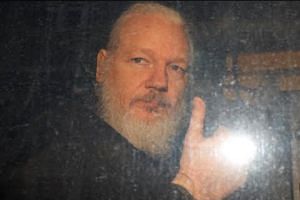 Julian Assange extradition could take months, or even years

The mystery of Julian Assange's cat: Where will it go? What does it know?

1. Karl Lagerfeld and his cat Choupette

Designer Karl Lagerfeld's Choupette is a social media star in her own right and quite possibly fashion's most pampered kitty.

She could also very well be the richest cat in the world after Lagerfeld's death, with talk that she may inherit a slice of his US$200-million (S$270-million) fortune.

She has chalked up 180,000 Instagram followers, starred in several ads and was featured in German carmaker Opel's calendar in 2015.

She is also the hero of her own book, Choupette: The Private Life Of A High-Flying Fashion Cat (2014), where she was photographed in the arms of supermodel Linda Evangelista and snuggling with model-turned-actress Laetitia Casta.

The two-year-old labrador was assigned as a service dog to Mr Bush in June 2018, and accompanied the former United States president in the final months of his life.

The dog had been sent to Bush by America's VetDogs, an organisation that trains and places service dogs with disabled military veterans and first responders.

Sully is named after the airline pilot Chesley "Sully" Sullenberger, who landed a passenger jet on the Hudson River in 2009, saving all 155 passengers and crew on board.

3. The Queen and her royal corgis

Queen Elizabeth is known to have a love for corgis and has owned more than 30 of them.

In April 2018, the last of the Queen's corgi dogs, who appeared with the British monarch for a film segment during the 2012 London Olympic Games opening ceremony, died at the age of 14.

Willow was a 14th-generation corgi descended from the first corgi, Susan, who was given to the Queen on her 18th birthday.

The monarch no longer has any more corgis, but still owns two dorgis - a cross between a corgi and a dachshund - named Vulcan and Candy, said The Guardian.

In 2014, Miley Cyrus took to Instagram to announce that she had a new pet piglet named Bubba Sue.

The pig went to appear on the cover of New York City-based Paper magazine with Cyrus in 2015.

It was reported in American media that Bubba Sue would get manicures and sleep on the couch.

Our new summer music issue with @MileyCyrus will make you as happy as a pig in mud! http://t.co/O74H9qaLkL pic.twitter.com/FJ5v7dANTH

5. Taylor Swift and her cats Meredith and Olivia

Taylor Swift's two pet cats, Meredith Grey and Olivia Benson, have gained a fan base of their own, after regularly appearing on the pop singer's social media accounts over the years.

She is the older sibling to Olivia Benson, whose name was inspired by the detective character from Law & Order: Special Victims Unit, also one of Swift's favourite shows.

"Meredith is one of the best cats. She doesn't leave fur or furballs and she is never aggressive or afraid of being around people," Swift was reportedly quoted as saying.

The pair of Scottish fold cats made their Hollywood debut last year in a scene in superhero film Deadpool 2.

Olivia has starred in a Diet Coke advertisement, a campaign for US mobile carrier AT&T, as well as Swift's own music video for her hit Blank Space.

6. Slash and his boa constrictor Pandora

The lead guitarist of the American hard rock band Guns N' Roses, whose real name is Saul Hudson, used to have a pet boa constrictor.

The snake had its own moment of fame when it appeared in the 1989 music video for the Guns N' Roses song Patience.

American popular culture magazine Rolling Stone reported in 2014 that the 1.8m red-tailed boa constrictor had been passed on to Slash by Lisa Flynt, the daughter of American publisher Larry Flynt.

Slash said of the male snake: "I named him Pandora because I thought it was a she. I didn't really check him out that well when I got him."

My boa constrictor who I've had since '88 passed away this yr. She was over 25 yrs old. & very sweet. For a snake. RIP Pandora. I miss u.

American actress Tori Spelling, known for her role in Beverly Hills, 90210, was previously reported to have a silkie bantam chicken, nicknamed Coco.

She told Lucky magazine in 2012 that the white and fluffy chicken was "often mistaken for a poodle".

She said she also made outfits for her pet, some of which are similar to her own vintage dresses. She also knitted a poncho for the chicken to wear during cool summer nights.