BONN (AFP) - Battle-weary diplomats left Bonn on Friday (Oct 23) after endorsing the rough outlines of a UN climate rescue pact, as Mexico invoked a super-hurricane nearing its coast as a portent of Earth's future if negotiations failed.

After a bruising round of talks, envoys were satisfied that the latest blueprint reflected everyone's core concerns.

But they were also anxious over the work to surmount ahead of a looming summit in Paris where the historic deal is supposed to be sealed.

Mexico's negotiator, Roberto Dondi, pleaded with his colleagues in the 195-nation climate forum to set aside differences and strive for the most ambitious agreement possible.

"In about four hours, Hurricane Patricia will hit the Mexican coast," he said at the close of a five-day session.

"I don't think I need to say more about the urgency to get this deal done," he said through tears.

"I ask you all to put aside your differences so together we can start working." The chairman gavelled through a proposal to endorse the latest draft agreement.

The document will now go to ministers and heads of state for the hard political compromises needed to unlock a final agreement. 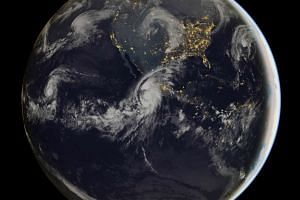 The Bonn negotiations were the last official round before the Nov 30 to Dec 11 conference in Paris - the culmination of half a dozen years of work since the ill-fated 2009 Copenhagen climate summit.

But the session got off to a false start, and was hamstrung throughout by squabbles between rich and developing nations about burden-sharing.

In the end, the G77 bloc of more than 130 developing countries, representing 80 percent of the global population, gave the draft its blessing.

"The text can be the basis and starting point for... negotiation," envoy Nozi pho Matoaka-Disko said on the group's behalf.

"Despite the initial differences, parties managed to make progress."

On Monday, the G77, including developing giants China and India, accused rich country partners of "apartheid" tactics and stripping its key demands from the evolving text.

Climate ambassador Laurence Tubiana of France, which will host the year-end UN summit, said latest draft represents "major progress compared to the one we had on the table at the beginning of the week." The Paris pact aims to be the first to unite all the world's nations in a single arena for climate action.

A lot of the remaining work will happen outside of the official UN climate forum, including a G20 summit in Turkey, where the thorny issue of climate finance will be high on the agenda.

Nearly 100 ministers will gather in Paris early November to discuss the text - the same ones who will be tasked with inking it a month later.

Developing countries insist rich nations should lead the way in slashing climate-altering greenhouse gas emissions, as they are responsible for historic pollution.

And they want assurances of financing to help decarbonise their economies and shore up defences against climate-induced impacts - superstorms, drought, flood and sea-level rise.

But industrialised nations balk at being saddled with a higher burden of responsibility.

They point the finger at emerging giants such as China and India, which are spewing carbon dioxide as they burn coal to power expanding populations and economies.

After many additions, swelling the text from 20 pages on Monday to 34 on Wednesday and 55 by the meeting's end, most parties felt satisfied that their views were now reflected.

"We are getting to the same starting line, and can start the sprint to Paris," climate analyst Mohamed Ado of Christian Aid said.

As negotiators quarrelled, US scientists reported Thursday that the first nine months of 2015 had been the warmest on record worldwide.

The goal of the climate negotiations is to cap warming at two degrees Celsius (3.6 degrees Fahrenheit) over pre-Industrial Revolution levels.

The pact will be supported by a roster of national pledges for curbing greenhouse gases, but over 150 commitments submitted to date still placed Earth on track for warming of 3 C, scientists say.

"Negotiators made some significant strides here in Bonn, but a much more vigorous pace is needed to secure a strong climate agreement in just a few weeks," commented Jennifer Morgan of the World Resources Institute.

The new text was "complete and balanced", said UN climate chief Christiana Figueres, but with all the additions "not as clear as it was in the beginning."

The challenge ahead, she said, was to "bring it down to a clear and concise structure."