LIMA (Peru) - There was a mood of watchfulness at this year's Asia-Pacific Economic Cooperation (Apec) Summit, Prime Minister Lee Hsien Loong said on Sunday (Nov 20) (Monday morning Singapore time), as world leaders await signals of the United States' commitment to free trade once it undergoes its leadership transition in January next year.

The election of businessman Donald Trump on an anti-trade platform has stoked fears that the US will become more protectionist, and leaders of the 21 Apec economies gathered at the meeting, including US President Barack Obama, had discussed the implications.

Speaking to Singapore reporters as he wrapped up a five-day trip to Peru's capital, PM Lee said what happened in the US is "very, very significant", but a lot will hinge on the team that US President-elect Donald Trump assembles, and the policies his administration adopts after it has considered the problems and weighed the options.

Asked about the mood at the summit, he said: "It is a mood of watchfulness, of waiting to see, and being cautious not to foreclose options prematurely, so that you find yourself at a dead end unnecessarily."

Mr Trump spoken out during his election campaign against free trade and the Trans-Pacific Partnership (TPP) trade deal that Mr Obama had pushed for.

But PM Lee noted that in previous US elections, candidates from Mr George Bush to Mr Obama, have had to modify their campaign positions after becoming president, "in the light of the test of reality and experience".

PM Lee Hsien Loong on lessons S'pore can draw from US election, Brexit

"So I fully expect that when the new administration comes in they will have to review their positions, but of course this time the US campaign has been a lot harsher than previous ones, in tone and in rhetoric. And so to make an adjustment is harder, but we have to wait and see," he said.

When asked about how the strategic balance in Asia-Pacific will be affected if the US becomes more protectionist, PM Lee said that US engagement in the region is positive for security, economic and trade reasons. 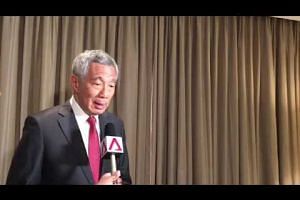 "So if you do not have that, you lose something valuable, if in fact the US turns inwards and becomes protectionist and anti-free trade, then of course the loss is even greater," he said, while stressing that this was speculation at this point.

As for the TPP, Mr Lee reiterated that TPP member countries will press on with the ratification process and will examine their options again if indeed the US decides to withdraw from the deal.

The TPP can come into force only if it is approved by six countries that account for at least 85 per cent of the group's economic output - which means ratification by both the US and Japan is essential. But ratification by the US is now unlikely.

At a TPP leaders' meeting on Saturday, Mr Obama had said he would continue to raise awareness of the agreement's importance back home. The leaders of the other 11 TPP countries had also said they would push ahead with the deal.

It was also Mr Obama's final overseas trip as US president, and he used the opportunity to meet foreign leaders.

He held talks with Russian President Vladimir Putin over the war in Syria, and sought assurances from Australian Prime Minister Malcolm Turnbull and Canadian Prime Minister Justin Trudeau that they would continue to advance free trade.

At a press conference at the end of the summit, Mr Obama acknowledged that "historic gains in prosperity" had not been evenly distributed.

"That's why I firmly believe one of our greatest challenges in the years ahead across our nations and within them will be to make sure that the benefits of the global economy are shared by more people," he said.

This year's Apec Summit took place amid rising anti-globalisation sentiments, and Apec leaders pledged in their joint statement to ensure that policies "contribute in concrete terms to raising people's quality of life and enhancing social equity in the region".

The document also outlined commitments towards improving connectivity in the region, enhancing food security and access to water, and addressing climate change.