It would be a big loss if US turns inwards but world must wait and see as Trump forms team, he says

President-elect Donald Trump, who had campaigned on an anti-trade platform, may have stoked fears of protectionism in the United States, but Prime Minister Lee Hsien Loong does not see a mood of despair descending on the world.

It is more a mood of watchfulness, as the world awaits the team he assembles and the policies his administration implements, Mr Lee said at a media conference with Singapore reporters.

He noted that past US presidents, including Mr Bill Clinton, Mr George W. Bush and current leader Barack Obama, have had to modify their campaign positions "in the light of the test of reality and experience".

"So I fully expect that when the new administration comes in, they will have to review their positions," Mr Lee said.

This time, however, the US campaign was a lot harsher than previous ones, in tone and in rhetoric, he added. "So to make an adjustment is harder, but we have to wait and see." 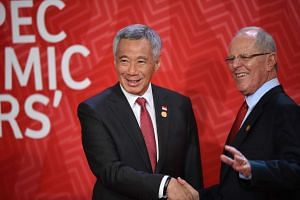 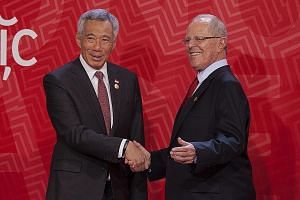 Mr Lee made the point when he was asked about the mood at the Asia-Pacific Economic Cooperation (Apec) Summit that ended in Peru on Sunday.

"It is a mood of watchfulness, of waiting to see, and being cautious not to foreclose options prematurely, so that you find yourself at a dead end unnecessarily," he said in the wrap-up session on his five-day trip to the annual event in which leaders of the 21 member economies meet to discuss economic integration and trade. The US leadership transition will take place in January next year.

Mr Lee also felt it would be a big loss should the US turn inwards, as American engagement in the region is positive for security, economic and trade reasons.

"So if you do not have that, you lose something valuable. If in fact the US turns inwards and becomes protectionist and anti-free trade, then of course the loss is even greater," he said. "But whether that happens is speculation."

As for the Trans-Pacific Partnership (TPP), Mr Lee said it would be a big loss if the trade pact does not come into fruition, given its strategic and economic importance.

"It would make a lasting contribution to the stability and the prosperity of the region, so we lose that, well, life goes on. But you have lost something precious and which would have been very worthwhile having," he said.

Mr Lee said much work and compromise had gone into the 12 TPP member countries reaching an agreement, and it would not be easy to negotiate a new deal with different conditions.

The TPP can go into force only if it is approved by six countries that account for at least 85 per cent of the group's economic output - which means ratification by both the US and Japan is essential. But ratification by the US now seems unlikely, in view of Mr Trump's opposition to it.

At a TPP leaders' meeting on Saturday, Mr Obama had said he will continue to raise awareness of the agreement's importance back home. The leaders of the other 11 TPP countries had also said they will push ahead with the deal.

"We will see how the Americans decide... and if in fact after two years they do not take it forward, we will examine our options again. We still have some time," said Mr Lee.