It is unclear how long this push will last. But Maduro appeared to keep the upper hand on Saturday, managing to avoid mass bloodshed, keeping the military loyal and blocking the aid.

Near a remote Brazil crossing, four people were reported killed amid clashes with government forces.

On the border with Colombia, National Guard soldiers fired volleys of tear gas and plastic pellets at supporters of opposition leader Juan Guaido, who were trying to persuade them to defect and permit tons of food and medicine into the country.

Just 23 soldiers asked for asylum, according to the Colombian migration agency, but the movement of the supplies was largely stopped.

Protesters set up barricades of burning tires and hijacked buses, setting them aflame.

Masked paramilitary gangs supporting the autocrat Maduro tore through the area there on motorcycles, firing guns in the air. 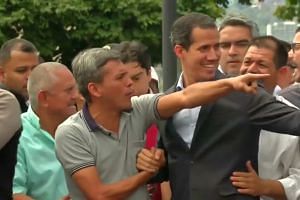 Maduro said on state television that his forces had managed to repel an invasion and said he was breaking off diplomatic relations with Colombia.

“The coup d’etat has failed,” he said. “We have defeated it.”

On a span leading to Urena, his supporters torched a truck that reached Venezuelan territory. Video on social media showed opposition marchers desperately heaving sacks of supplies off the trailer before it burned.

The aid initiative is a watershed in Guaido’s campaign to replace Maduro, which began last month when Guaido said the constitution made him acting president because last year’s election was a fraud. The US says political reforms must follow, while traditional aid groups have shunned the effort as politically tainted.

The bridges and border towns around Cucuta, where organisers had envisioned a peaceful popular effort to bring help, turned into scenes of fire, smoke and gunshots. The stretch of near-dry riverbed on the Venezuelan frontier is crossed by four narrow international bridges over which Guaido worked to deliver hundreds of tons of humanitarian aid to the near-starving nation.

US sanctions on the oil industry, Venezuela’s only real source of hard currency, threaten further suffering in a nation wracked by hyperinflation and hunger.

The sanctions are part of a two-pronged approach by Guaido and his US supporters – strip Maduro of cash to buy even the scraps of food he’s been distributing to citizens, then ride to the rescue with critical supplies of their own.

“The military in Venezuela today is still behind Maduro and the question is not, ‘Does Maduro go,’ but ‘is there civil war before that,’” Ian Bremmer, president of the political risk research firm Eurasia Group, said on Bloomberg Television.

“It’s really tough to make a call as to whether the path toward post-Maduro can be smooth or is going to be desperately violent.”

In Pacaraima, Brazil, two trucks carrying medicine and food made it to a border zone that is technically in Venezuela, but went no farther. Pro-government groups in the nearby Venezuelan region of Gran Sabana shot at people protesting the government’s barricade. Four died and 35 were wounded over the last day, local authorities said.

US President Donald Trump has said all options are open if Venezuela continues to block the supplies. Vice-President Mike Pence travels to Colombia on Monday to meet with President Ivan Duque and others, his office said.

Late Friday, US National Security Adviser John Bolton cancelled a planned trip to South Korea to focus on Venezuela, according to his spokesman. Late on Friday, Bolton tweeted that “the world is watching” the situation on the Brazilian border.

“The Venezuelan military should protect civilians, not shoot them,” he said.

This weekend’s confrontations cap a monthlong run of protests and sanctions aimed at unseating Maduro, 56, the hand-picked heir of the late President Hugo Chavez. After Guaido invoked Venezuela’s charter on Jan 23 to declare himself head of state, the US urged other nations to recognize the 35-year-old as president.

Humanitarian aid is critical but “will not improve the political and economic conditions that are responsible,” the US State Department said in a statement late on Friday. Venezuelan authorities should carry out “the critical economic and political reforms necessary to end the hyperinflation, supply shortages, and corruption at the heart of this crisis.”

Colombian President Ivan Duque had said on Friday that a “human torrent” would get aid across. Elizabeth Salazar, a 62-year-old Venezuelan cancer patient who left her country for treatment nine months ago, was prepared to cross the Las Tienditas bridge in a wheelchair with oxygen tubes in her nose.

“I don’t want anybody to suffer like me,” she said. A man accompanying her gently kissed her hairless head.

Not all scenes were so poignant. Protesters in the Venezuelan border town of Urena began squaring off with guardsmen early on Saturday. Men with shirts over their faces doused piles of tires with gasoline and set them alight. Some stormed a school where militiamen were staying, forcing them out – injuring at least one – and burning their uniforms.

Crowds hijacked three buses to use as battering rams against a line of troops blocking the bridge in that town. They set one ablaze before it ran off the road and into a building, which also caught fire.

The soldiers tried to disperse the crowds with tear gas and plastic buckshot, and armored vehicles pushed them away from the international crossing. And then the pro-Maduro gangs known as colectivos began speeding through the area.

Simon Vargas, 47, the former mayor of San Antonio del Tachira, Venezuela, tried to rally the crowds but took shelter in a doorway after the masked men on motorcycles fired pistols into the air, sending protesters scrambling.

“Colectivos are using the bullets of the armed forces of the people against the people,” Vargas said, holding a 9mm cartridge bearing the stamp of the state arms maker CAVIM.