In the video, General Francisco Yanez, a member of the air force's high command, called on other members of the military to defect, saying that he was rejecting Mr Maduro's "irritating and dictatorial authority".

"Given the happenings of the last few hours, already the transition to democracy is imminent."

The high command's webpage lists him, along with a photo, as the air force's head of strategic planning. On its Twitter account, the high command accused the general of treason.

Gen Yanez is the first active Venezuelan general to recognise Mr Guaido since he proclaimed himself president on Jan 23. Mr Guaido has acknowledged "clandestine meetings" with members of the armed forces and security forces, who he is trying to woo with an amnesty offer.

Tens of thousands of protesters were set to pour onto the streets of Caracas yesterday to back Mr Guaido's calls for early elections as international pressure increased on Mr Maduro to step down. 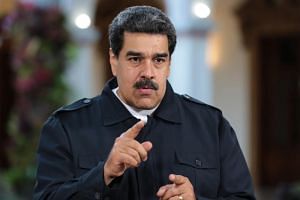 Major European countries have set a deadline of today for Mr Maduro to call snap presidential elections. Failing that, they will join the United States in recognising National Assembly speaker Guaido as Venezuela's interim president.

"Maduro's tyranny must end and must end now," US Vice-President Mike Pence told a rally of exiled Venezuelans in Miami on the eve of the protest.

Mr Guaido's call for a massive show of popular support coincides with a huge pro-Maduro demonstration. The ruling Socialist party was due to celebrate the 20th anniversary of the rise to power of Hugo Chavez, Mr Maduro's late predecessor, yesterday.

The "clear goal" of the march was "to accompany the ultimatum given by members of the European Union", Mr Guaido said ahead of the rally, which will begin outside the EU offices in eastern Caracas.

"We are going to stage the biggest march in the history of Venezuela and our continent," he added.

Mr Guaido moved to expand his international support base by assuring Venezuela's main creditor, China, that he would honour bilateral agreements if successful in ousting Mr Maduro.

The rival marches will take place in different districts of a tense Venezuelan capital. Mr Maduro's supporters will concentrate in Plaza Bolivar in the heart of Caracas, 10km from the EU offices.

In a letter to the presidents of Mexico and Uruguay published last Friday, Mr Guaido ruled out any negotiations with Mr Maduro unless he starts "the transition process, culminating in the holding of free elections".