WASHINGTON (REUTERS) - A top Russian security official on Tuesday (Feb 26) accused Washington of deploying forces in Puerto Rico and Colombia in preparation for a military intervention in Venezuela to topple Moscow’s ally, President Nicolas Maduro, something the United States denied.

“...The United States is preparing a military invasion of an independent state,” Nikolai Patrushev, secretary of the Russian Security Council, was quoted as saying in an interview with weekly newspaper Argumenty i Fakty.

“The transfer of American special operations forces to Puerto Rico, the landing of US forces in Colombia and other facts indicate the Pentagon is reinforcing its troops in the region in order to use them in an operation to remove... Maduro from power,” Patrushev said.

However, the US special envoy for Venezuela, Elliott Abrams, when asked on Tuesday if Washington was preparing to take military action in Venezuela, responded: “No.”

“The president has said all options are on the table. Presidents always say that and rightly so. But it ill behooves the Russians to talk about military intervention after they have dismembered both Georgia and Ukraine,” Abrams told reporters at the United Nations ahead of a Security Council meeting on Venezuela.

Venezuela, which has been plunged into political turmoil, was rocked by violent clashes at the weekend.

The United States and a raft of other countries have backed the country’s opposition, while China and Russia have stood by Maduro’s government. 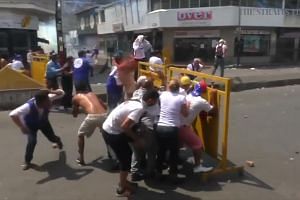 Patrushev said Washington had asked Moscow for consultations on Venezuela and that Russia had agreed, but that US officials had repeatedly postponed them under false pretexts.

US officials have previously dismissed Russian allegations about US plans for Venezuela as baseless “propaganda”.