WASHINGTON (REUTERS) - The United States is considering imposing financial sanctions that could prohibit Visa, Mastercard and other financial institutions from processing transactions in Venezuela, a senior Trump administration official said on Thursday (March 14).

The move, which has not been finalised, would represent another step in tightening the financial noose on the government of President Nicolas Maduro and his supporters.

The sanctions would be targeted at the elite and groups loyal to Maduro, including members of the military, armed gangs and Cubans operating in Venezuela, while aiming to spare ordinary Venezuelans.

"The purpose of these sanctions is to continue to deprive the illegitimate Maduro regime of access to funds and deny their ability to continue stealing from the Venezuelan people," the official said.

Venezuela's information ministry did not immediately reply to a request for comment.

US President Donald Trump's administration has hit Maduro's government, his political allies and Venezuela's state-owned oil company PDVSA with a series of sanctions since recognising opposition leader Juan Guaido as the country's interim president at the end of January.

It has threatened further measures. 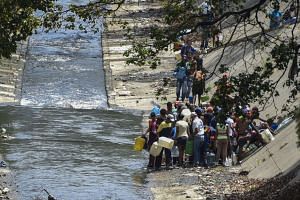 The potential financial sanctions are modeled after similar ones imposed by the Trump's administration on Iran, North Korea, Syria and, to a lesser extent, Russia, the official said.

The sanctions would aim broadly to block state-owned financial institutions' access to the international financial system, including credit card providers as well as SWIFT, the Belgium-based financial messaging service.

Specific financial institutions considered to be complicit in propping up Maduro or the whole financial sector in Venezuela could be targeted in the sanctions.

The United States would use its authorities to exempt everyday Venezuelans from making transactions to buy food and medicine.

The sweeping financial sanctions against PDVSA, aimed at curbing crude exports to the United States and driving Maduro from power, were the strongest measures yet against Venezuela's vital oil sector. US companies doing oil business with Venezuela have been ordered to divert payments to special blocked accounts.

Senior Trump administration officials have warned in recent weeks that Venezuelan banks or international financial institutions could face US sanctions for helping Maduro to steal or hide Venezuelan state assets.

The US Treasury Department earlier this week imposed sanctions on Moscow-based Evrofinance Mosnarbank, jointly owned by Russian and Venezuelan state companies, accusing it of helping PDVSA evade US financial restrictions.

More than 50 other countries have joined the United States in recognising Guaido. The Trump administration has also urged other countries to target Venezuela with similar tough banking and oil sector sanctions but few have followed suit.