RIO DE JANEIRO (AFP) - The death of a one-year-old boy during a shootout brought new horror to Rio de Janeiro, already reeling from the brazen murder of a human rights activist.

The toddler was among at least three bystanders killed when one of Rio's ruthless drug gangs got in a firefight with police in a crowded favela - dangerous working-class communities where nearly a quarter of Rio residents live.

The bloodshed late on Friday in the Alemao favela followed the assassination-style shooting last Wednesday of Ms Marielle Franco, a city councilwoman famous for her outspoken protests against police brutality.

Ms Franco's murder sparked a huge street protest last Thursday, reflecting anger in a city where the army took control of security a month ago with the mission of ending the chaos.

"We want to end this business of children getting killed by stray bullets in the communities," he said while visiting the Vila Kennedy favela, which the generals now running Rio's police have made a focus of their campaign.

"We want to end the tragedy of our city council member, gunned down at nine at night and whose daughter will never again see her come home," Mayor Crivella said. 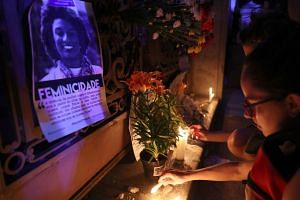 That was unlikely to console the parents of the boy slain while in his pram during Friday evening's incident in the Alemao favela.

The clash began when a drug gang opened fire on police from a stolen white Jeep, police said in a statement. Officers returned fire, capturing one of the three suspects and seizing the bullet-riddled vehicle, a revolver and an assault rifle.

However, stray bullets left a woman, a man and the boy dead, also wounding his mother and another child, police said.

The father, Mr Fabio Antonio da Silva, described his son as the victim of a government with no other plan than to ramp up violence.

"Are bullets going to solve the situation in our country?" he asked on Globo TV.

"This violence is out of control and our government doesn't have a solution... My son was just one year old. His life was stopped, stupidly, by a system that has failed our country." . 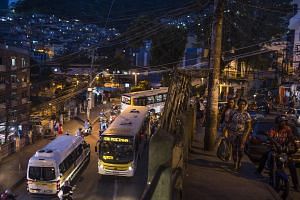 In many favelas, gangs operate with near impunity, openly carrying assault rifles, imposing protection rackets on locals and recruiting children as drug dealers.

Police, though, are frequently accused by major human rights organisations of being trigger-happy and at times carrying out extrajudicial killings.

After the latest violence, police stressed in a separate statement that officers involved were being questioned and that their weapons had been taken away for analysis.

However, public faith in the integrity of Rio's police is at rock bottom following the killing of Ms Franco, who shortly before her death had accused one police unit of acting as a death squad.

"It is an extremely painstaking task... to win back the feeling of security that the Brazilian people want," he said.