WASHINGTON • The warning from the Pentagon was unequivocal - military personnel should delete TikTok from all smartphones.

A number of United States military branches have banned the popular Chinese-owned social media app on government-issued smartphones in the wake of the warning issued by the Defence Department last month.

Some have even strongly discouraged members of the armed forces from using TikTok for personal purposes.

The vigilance coincides with the US Congress' heightened scrutiny of the short-form video-sharing platform and a national security review of TikTok, which is among the top downloaded smartphone apps worldwide.

"This decision is consistent with our efforts to proactively address existing and emerging threats as we secure and defend our network. This block only applies to government-issued mobile devices."

In a Dec 16 message to the various military branches, the Pentagon said there was a "potential risk associated with using the TikTok app", and it advised employees to take several precautions to safeguard their personal information.

It said the easiest solution to prevent "unwanted actors" from getting access to that information was to remove the app.

The US Army has also banned TikTok on its smartphones.

Mr Josh Gartner, a spokesman for ByteDance, the Chinese parent company of TikTok, declined to comment on the Pentagon warning and the response of several military branches. 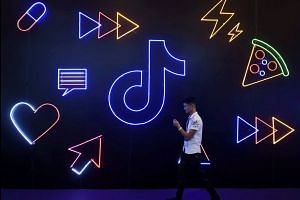 US Army cadets told not to use TikTok in uniform

This is not the first time the US Defence Department has urged members of the military to remove a popular app from their phones.

In 2016, the hugely popular Pokemon Go augmented-reality game was barred from military smartphones. But in that case, officials cited concerns over productivity and potential distraction hazards. The Canadian military also grappled with Pokemon Go.

The concerns over TikTok centre on cyber security and alleged spying by the Chinese government.

In a blog post last November on TikTok's website, TikTok US general manager Vanessa Pappas wrote that data security was a priority and that the company wanted to be as transparent as possible for stakeholders in the US.

The blog post came as the US government opened a national security review of the Chinese company's acquisition of the American company that became TikTok.

"We store all US user data in the United States, with backup redundancy in Singapore," Ms Pappas wrote. "TikTok's data centres are located entirely outside of China."