MEXICO CITY (REUTERS) - Tempers frayed in Mexico City on Friday (Sept 22) as the search for survivors amid twisted rubble of collapsed buildings began to wind down three days after the country's most deadly earthquake in a generation.

The 7.1 magnitude quake leveled 52 buildings in the sprawling Mexican capital at lunchtime on Tuesday, leaving thousands homeless and close to 300 people dead. Apartment blocks, offices, a school and a textile factory were among the structures that were destroyed.

Across the city, thousands of rescue workers and special teams using sniffer dogs and heat sensors combed wreckage, while the massive outpouring of support from volunteers sparked global praise for Mexico's spirit.

Efforts were not fast enough, though, for some family members waiting outside an office building that collapsed in the fashionable Roma neighbourhood.

As storm clouds gathered over the city, families worried that rain could slow the pace of rescue efforts.

"Mancera and EPN: We demand results" read one sign. "They are still alive. Don't kill them" and "We don't want machines"read others, referring to rumours that the military would use bulldozers to hasten removal of rubble deemed unlikely to harbour survivors.

Many sites had already been cleared of rubble by Friday afternoon and chances were dimming of finding anyone else alive.

US rescue workers went to work on Friday in the collapsed office building, looking for six people who were still missing.

Mexican soldiers and volunteers, supported by teams from as far afield as Israel and Japan, have so far rescued at least 60 people from the ruins in Mexico City and surrounding towns.

For many the search was highly personal.

Firefighter Teresa Ramirez Flores, 40, was helping search an office building in Mexico City's Roma neighborhood where her cousin Carolina Muniz, a 43-year-old accountant, was on the second floor when the building collapsed.

"We want to be superheroes so that our country doesn't suffer," she said at a site where volunteers brought a wheelbarrow filled with candy for the rescue teams.

After three days though, rescuers were finding more dead bodies than survivors and frustration was increasingly evident.

Luis Ruiz, a 39-year old carpenter, complained that the police would not let him enter the ruins where his sister and two of her children were buried in the rubble. "I felt powerless to be unable to get my family, unable to do anything," he said.

Across the city of 20 million people, many whose dwellings had become uninhabitable sought a place to call home, raising the specter of a housing shortage. Senior officials said there could be 20,000 badly damaged homes in the states of Morelos and Puebla.

Julia Juarez, 56, sat in a park where the homeless set up tents. "All the help we have received is from the civilian population. The government has not sent anything at all," she said. "No food, no clothes, no water, not even an Alka-Seltzer."

Other Mexican volunteers complained of being displaced by foreign rescue workers who flew in to help.

Oscar Ruiz, a firefighter from the state of Guanajuato who had raced to the capital after the quake, said he was close to a survivor under the rubble and could hear a heartbeat with a listening device when his team was pulled to make way for Israeli and Japanese teams. "Do you think I wanted that?" Ruiz said. It was not clear what happened after he left the site.

In the hard-hit Roma neighborhood, Jorge Hernandez and a team of volunteers from Mexico City packed up to move on to isolated villages in Morelos. He said they were doing so after military commands declined their assistance.

Mexico City "is over saturated with support and there are very remote communities in Morelos that have not received help. That's why we are going there. There, they need so much help,"Hernandez said.

Tuesday's massive quake struck on the anniversary of the deadly 1985 tremor that killed some 5,000 people in Mexico City.

As the shock of this week began to subside, exhaustion crept in, along with growing discontent.

On Thursday, Mexico's Navy apologised for communicating incorrect information in a story about a girl supposedly trapped under a collapsed school in Mexico City. 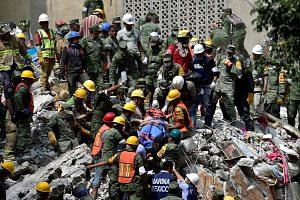 A frantic effort had been made to reach the child, dubbed Frida Sofia by local media, but it turned out that the widely-publicised story had been false, leading to anger.

Francisco Ortiz questioned whether attention directed at trying to rescue the phantom girl had diverted resources from other places where they were desperately needed, like the apartment building where his sister Maria was trapped beneath debris.

The authorities had waited until Thursday to begin searching the building. The owner, Juan Salazar, said all the renters had been accounted for before realising that Ortiz's sister Maria, a maid, had been washing clothes on the roof when the quake struck.

Salazar said he called civil protection and also implored passing brigades of rescue workers to help, but it was two days before rescue efforts began. "It was negligence. Nobody wanted to take responsibility, neither the army nor Civil Protection," said Ortiz.

On Friday afternoon, after a full day's search, rescuers pulled Maria's body from the rubble.