BUENOS AIRES (AFP) - Two men were arrested Friday (May 10) on suspicion of murdering a civil servant and seriously injuring a lawmaker in Argentina, in a brazen crime in broad daylight.

Marcelo Yadon was shot five times at close range as he walked in a square in front of the National Congress at 7 am Thursday with his childhood friend and lawmaker Hector Olivares, who was in a critical condition and underwent emergency surgery.

Juan Jose Fernandez, a 42-year-old street vendor known as "the Gypsy," was arrested in the center-east of Argentina, some 300 kilometres from the scene of the crime.

Juan Jose Navarro Cadiz, known as "the Onion," was arrested in neighbouring Uruguay. Six people in total have been detained in connection with Thursday's shooting.

Authorities said they had ruled out a political motive for the murder.

"Light has been shed on the incident and we can confirm that it wasn't a political crime," said Public Safety Minister Patricia Bullrich, who suggested an organised crime hit.

"Yadon was the murder target. Our hypothesis is that it was a personal attack," she said. 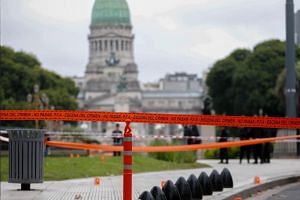 Yadon, who was 58, was killed on the spot by two shooters in a parked car.

Olivares, 61, was hit by three bullets and is fighting for his life, said Pablo Rossi, assistant director at the Ramos Mejia hospital treating him.

Argentine press reports claimed the motive was related to a relationship between Yadon, who was married with children, and Fernandez's 24-year-old daughter, Estefania.

She and her partner, Rafael Cano, were among those arrested.

The shooting was caught on security cameras. Shots were fired at Olivares and Yadon from inside a parked car, causing both to fall to the ground.

Olivares, a lawmaker from the ruling coalition, and Yadon worked in La Rioja state in the northwest, and shared a flat when in Buenos Aires.