Pro-gun Mr Bolsonaro, whose tough-on-crime rhetoric helped get him elected last year, signed the controversial order on Tuesday (May 7), but the full text was released only on Wednesday, showing a wide range of professions, including hunters, farmers and even certain journalists, are now allowed to carry their guns on the street or at work.

The former army captain defended the move as honouring the result of a 2005 referendum in which nearly 64 per cent of Brazilians rejected a law that included, among other things, a total ban on the sale of arms.

But experts warned that the loosening of restrictions would fuel gun violence in a country which already has one of the highest homicide rates in the world.

Brazil recorded 64,000 murders in 2017 - a rate of almost 31 per 100,000 inhabitants, or three times higher than the level the United Nations classifies as endemic violence.

"We can expect an increase in this death toll," said Mr Ivan Marques, executive director of the Sou de Paz Institute, which campaigns against violence.

"We calculate that more than 20 million people are now allowed to carry weapons around. It's the worst thing that could happen to Brazil right now." 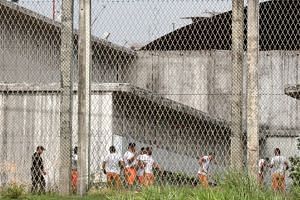 The decree also allows licensed gun owners to buy up to 5,000 rounds of ammunition a year, depending on the type of weapon, compared with the current limit of 50.

"Brazilians will be allowed to own up to four firearms without requiring formal clearance from the federal police," said Mr Robert Muggah, research director at the Igarape Institute think tank in Rio de Janeiro. That would be 20,000 rounds per person, he added.

And the decree makes it easier to import weapons and ammunition - long demanded by global manufacturers and fans of foreign brands.

This "represents one of the most dramatic shifts in Brazilian firearms policy in decades", Mr Muggah said.

Various political parties and activist groups are planning to challenge the order in the Supreme Court. One of their arguments is that the decree is unconstitutional because it creates a new law, rather than modifies an existing one.

"These measures will fatally undermine public security," warned Mr Muggah. "This is in direct violation of the 2003 firearms regulation that prohibits carrying."

Brazilians are allowed to own firearms if they meet certain criteria. But these weapons are restricted to homes, shooting ranges and - for those who have a licence - hunting, Mr Muggah said.

Mr Bolsonaro has spoken in favour of allowing people to carry guns on the streets, but the support of Congress is required to change the law.

"We went to the limit of the law. We did not go over the law," Mr Bolsonaro said on Tuesday after signing the decree in front of beaming members of Congress and industry lobbyists who clapped and made pistol signs with their hands.

Foreign and domestic arms makers have been hoping that Mr Bolsonaro's rise to power would translate into looser laws and greater government spending in the sector.

But experts warned that the new rules would lead to more legal weapons and ammunition ending up in the hands of criminal gangs, which already terrorise swathes of Brazil's major cities.

They also fear an uptick in deadly violence at bars or in road-rage incidents if gun owners are carrying their weapons.

Multiple studies around the world have shown that "more arms mean more crimes and more homicides", said Mr Daniel Cerqueira, an adviser for the Brazilian Forum of Public Security.

Even gun enthusiasts who do not work in the professions mentioned in Mr Bolsonaro's decree could easily qualify simply by registering as a hunter, sports shooter or collector - known by the Portuguese acronym CAC.

"It's pretty easy for any citizen to register as a CAC," said security specialist Caio Pizetta Torres at Control Risks in Sao Paulo. "We are talking about expanding (the right to carry guns) to people who are not really used to or don't have the culture of using firearms."